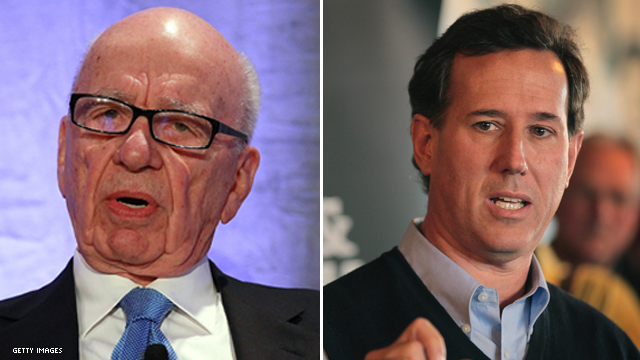 "Good to see Santorum surging in Iowa. Regardless of policies, all debates showed principles, consistency and humility like no other," Murdoch wrote.

Murdoch's media empire, News Corporation, oversees the Fox News Channel, which previously employed Santorum and former House Speaker Newt Gingrich as contributors. Their contracts were terminated in the spring before they officially joined the race for the White House.

Santorum's support in Iowa has swelled in recent days, with new polls showing the former Pennsylvania senator and social conservative placing within the top tier of the GOP presidential field.

Following a year of controversy surrounding his British newspapers, Murdoch joined Twitter in an account verified by Twitter co-founder Jack Dorsey, on Saturday. The billionaire tweeted more than a dozen times and gained 30,000 followers during his first two days on the site.