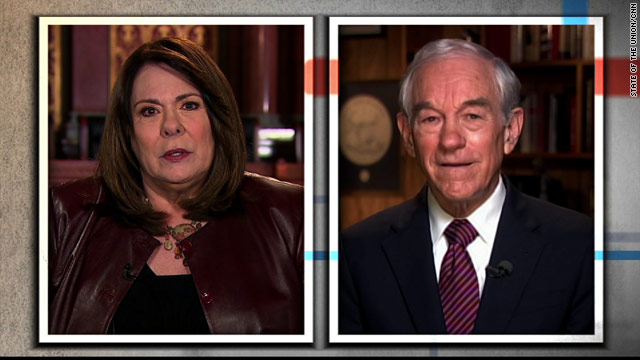 "I may come in first. I may come in second. I doubt I'll come in third or fourth," Paul said Sunday on CNN's "State of the Union." "I would say the people are with me on this, and the momentum is going to continue regardless of what happens and what place I am Tuesday night."

According to a new Des Moines Register poll released Saturday night, the latest and final major poll before caucus day, Paul is battling for the top spot with former Massachusetts Gov. Mitt Romney. Paul came in second with 22% to Romney's 24% support among likely GOP caucus goers, a margin within the sampling error.

Paul's Republican opponents have taken aim at the Texas congressman as he's moved to the front of the pack in Iowa, criticizing his non-interventionist views on foreign policy and less aggressive stance on Iran's nuclear development.

They've also pounced on newsletters published under Paul's name in the 1990s that included controversial remarks regarding race.

Responding to the attacks, Paul said he's been consistent on his views compared to his rivals, who he claimed are "struggling" to find ways to attack him and are now "demagoguing the issues."

"They've been all over the place. They've been flip-flopping and they can't defend themselves," Paul told CNN Chief Political Correspondent Candy Crowley. "They're having a little trouble finding any flip-flops on me, so they have to go and dig up and distort and demagogue issues."

Paul hasn't entirely ruled out a third party White House run but said Sunday he is not considering the option as of now.

"I'm essentially tied for first place. Why would I even consider doing anything like that?" Paul said. "I have no plans of doing it. We're doing very, very well. People should just be a little bit patient."