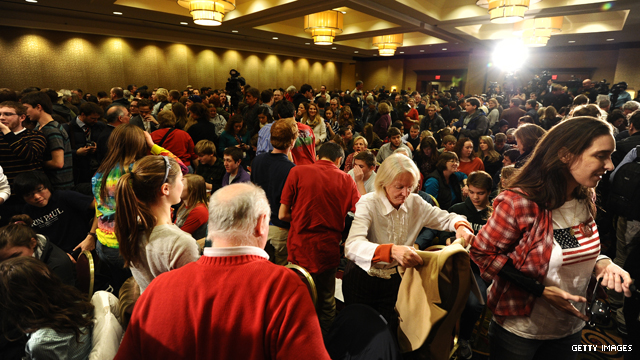 American Sauce: The art of the caucus

Des Moines (CNN) – Think the Iowa caucuses are about who wins? Think of this as a hard, cold numbers game? Try again. There is an art to the caucuses, an art of strategy and sweat that many outside the Hawkeye State never understand.

"This state has never, in my opinion, been about the win," said Jim Conklin, who trains the caucus volunteers for the Linn County Republican Party, in Cedar Rapids. "It's about the people who get weeded out."

In this week's American Sauce podcast, we lay out the true art of the caucuses: the Republican recruiting bonanza, the show leather game, as well as the sharp battle within the Iowa GOP over religion and what, ultimately, the caucuses mean. Listen here or keep reading.

"Here in Iowa, (the candidates) all get vetted", said Conklin to a group of caucus volunteers. "When they're done in Iowa, if Obama can find anything new to pick apart on these people, I will be shocked."

This is how Conklin and to a chorus of Republican leaders in the state, including party chairman Matt Strawn, address Iowa's mixed track record on picking a GOP nominee. They insist Iowa, instead, is about culling the herd.

But what is the main purpose of the caucuses? Some party leaders say it's not nominee selection. But "party building". Translation, recruiting.

"Party building is the most important issue that night," Conklin insists, "and the (presidential) straw poll is sweet because it puts more butts in the seats."

To participate in the GOP caucuses, voters must either be registered Republicans or they must register that night. Thus, the party can score thousands upon thousands of names, phone numbers and addresses to use for the big battle: November. The Iowa GOP has increased registrations by 37,000 voters in the past four years and hopes to add significantly Tuesday night.

How do you win in Iowa (or avoid losing)? Listen to our podcast.

- CNN's Dan Szematowicz and Emma Lacey-Bordeaux contributed to this report.