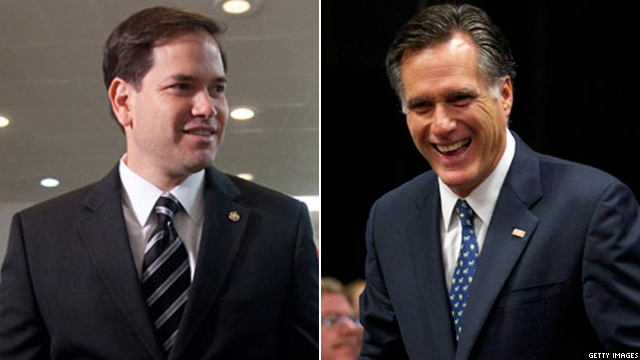 (CNN) – Though the candidates themselves are wary of naming possible running mates, a top Democrat on Monday said a ticket pairing presidential hopeful Mitt Romney with rising Republican star Marco Rubio would be "extreme."

"If there's with a ticket like that, it would be the most extreme ticket in history when it comes to immigration," Debbie Wasserman Schultz, who both represents Florida in Congress and is Chair of the Democratic National Committee, said on CNN's "The Situation Room with Wolf Blitzer."

But bad news for whom, she did not say. A November Suffolk University poll of Florida voters showed that Rubio, a senator from Florida, could help the Republican nominee win the state's 29 electoral votes, and Rubio has taken to the national stage to warn his own party against overly strong words on immigration.

Rubio has said repeatedly that he has "no interest in serving as vice president."

Romney has rarely bridged the topic of who might be his number two, though in November, he named another rising Republican star, a New Hampshire senator who was sitting beside him in the interview.

"There are probably 15 names of people, including Kelly Ayotte," Romney said on Fox News. "I mean, there are terrific Republicans in the Senate, in the House, in governors' offices."

On Monday, Wasserman Schultz brushed off the suggestion that Democrats are more "scared" of a Romney candidacy than any of his rivals.

Any of those rivals, Romney said at a presidential debate in September, would be suitable on his ticket, should he be the nominee.

And any of those rivals, he said, drawing on a theme of his campaign, would be better than reelecting the President.