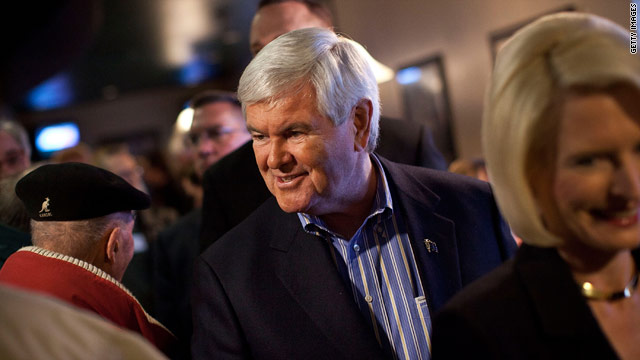 The former House speaker said he feels "Romney-boated" by the millions spent on negative ads run against him by Restore Our Future super PAC that supports the candidacy of the former Massachusetts Gov. Romney.

"For a state this size, to spend that number of dollars in negative ads aimed at one candidate is pretty amazing," Gingrich said Sunday at a press availability in Marshalltown, following up on a statement he made to Politico that Romney would buy the election “if he could.”

When asked if he feels "swift-boated," a reference to the negative ads that partially derailed John Kerry's presidential bid in 2004, Gingrich responded, "No, I feel 'Romney-boated.'”

Gingrich’s positive campaign “experiment” is on the line with just days to go until the first votes are cast in the 2012 presidential contest. In remarkably better health and better spirits after two days of campaigning with a mild flu, Gingrich seemed somewhat resigned to a mediocre finish in Iowa on January 3 but is rethinking his strategy in New Hampshire and South Carolina.

“[W]e decided we would in fact try to figure out could you do well enough remaining positive to survive and I think the answer is we’re going to do well enough to survive, and then we’ll decide what to do from that point on,” Gingrich said.

Signaling a departure from the positive-message ads he’s released so far, Gingrich said his campaign will “probably” release television ads after Iowa drawing sharper contrasts between himself and Romney.

“Because I think if somebody spends $3.5 million lying about you, you have some obligation to come back and set the record straight,” said Gingrich, who for days talked about responding to attacks with airtime.

Gingrich admits the barrage of attacks “drove us down from the 30s to the teens” but he said the money spent by Romney and his surrogates hasn’t yielded increased support.

“And by the way all it did was guarantee that some other conservative emerged and it didn’t help Romney at all,” said Gingrich, referring to former Pennsylvania Sen. Rick Santorum, who is now ahead of the former speaker in third place in the latest Des Moines Register poll.

Gingrich charges Romney for being dishonest for not repudiating Restore Our Future, the independent group run by his former aides, which has spent $800,000 in Iowa through last week going after the former speaker, according to Campaign Media Analysis Group.

"If I could have done anything differently I would have pulled the plug on Romney's PAC," the former speaker said, who said he may eventually run ads linking Romney to the group. “[H]e can go around the country all he wants to and say he’s not responsible for this, it makes him look like – here’s my simple tagline: somebody who will lie to you to get to be president will lie to you when they are president,” he said.

Gingrich said his ads about Romney would draw “legitimate contrast” and be based on facts. “Frankly I think you can do very calm, very pleasant ads that the nature of the Republican Party is such that a calm and pleasant ad that says he was for tax paid abortions, I’m against it, you can say it happily, pleasantly, it works just by the nature of the data.”

He often makes a similar distinction when asked whether he would go negative with President Barack Obama in a general election fight. “If you tell the truth it sounds negative,” the former speaker has said.

Gingrich suggests the super PAC Winning Our Future that is run by his former aides should do the same.

“I would not want them to run an ad that was factually false and I wouldn’t want them to run an ad that was sort of a deliberately gotcha,” Gingrich said at the Sunday press availability. “Romney called himself a moderate as governor, okay so this is not like going back 25 years. Romney did register as a Democrat to vote for Paul Tsongas. These things are not, you know, you don't have to go out and select things out and distort them, you don't have to get into his Bain career, and you don’t have to do any of the things that would get into negative advertising.”