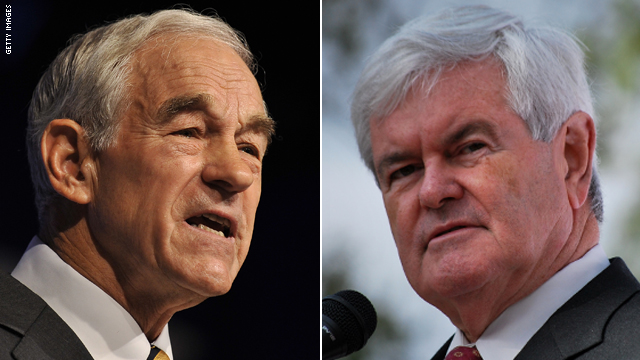 The former House speaker has been the target of negative advertisements from Paul and former Massachusetts Gov. Mitt Romney. But in an interview with the Cedar Rapids Gazette, Gingrich all but dismissed the Texas congressman's attacks, saying he doesn't think Paul is electable.

"Ron Paul represents a very ideological movement that, you know, thinks an Iranian nuclear weapon doesn't matter and legalizing drugs is fine. I mean I think he plays by a totally different set of rules than anybody else," Gingrich said.

Gingrich didn't back down from his comments after the Cedar Rapids Gazette followed-up with this question: "Did you just dismiss Ron Paul as a serious candidate?"

"I do think he's a serious protest candidate and I think as long as he's a protest candidate on things like the Federal Reserve, he actually serves a useful purpose in building an issue that really matters," Gingrich said. "But I think if you really stop and say to yourself, can you imagine him as president given his beliefs and his system, I think the answer is no. You couldn't imagine the American people doing that."

In the editorial board interview, Gingrich said he holds Paul and Romney to different standards.

"Mitt Romney is a serious person and as a serious person he has some responsibility to set a decent standard, and he couldn't show the ads he's running to his grandchildren with any sense of pride," said Gingrich, referring to the negative ads targeting Gingrich and produced by Restore Our Future super PAC, which operates independently from the Romney campaign but is run by former staff members.

In a CNN interview that will air Monday on "Piers Morgan Tonight," Gingrich pressed Romney to repudiate the super PAC ads.