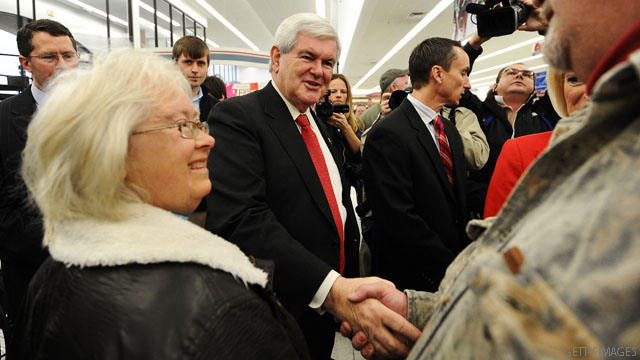 Iowa ad spending down, but negative ads up

Des Moines, Iowa (CNN) - Ad spending in the Hawkeye State has been fast and furious the past couple of weeks, with much of the barrage of campaign commercials negative in nature. But regardless of the recent surge, the Republican presidential candidates are behind the pace of their predecessors four years ago.

The GOP presidential campaigns and the independent super PACs supporting them had spent nearly $5.5 million through Friday on ad buys in Iowa this cycle, according to numbers from Campaign Media Analysis Group. That number is certain to go up after a spate of ads in the closing days before the caucuses.

Campaigns spent $11,620,860 through the caucuses in 2008 before a 2010 Supreme Court ruling allows corporations and unions to spend unlimited money to support candidates.

A slower start to the race for the nomination, a heavier emphasis on debates rather than traditional retail politics in the early voting states, and a downturn in fundraising by the candidates compared to four years ago, are contributing factors to the lower ad spending.

"Iowa was late starting and less will be spent in 2011-2012, but last few weeks the air war has been as intense as anything I have seen, and as negative as anything I have seen in a primary. Two out of three ads were negative and most of those were directed at Gingrich with Romney, Perry, and Paul also taking some shots," says Kenneth Goldstein, CMAG president and CNN's consultant on TV advertising.

Gingrich, who was the front-runner in surveys in Iowa at the beginning of December, blames his drop in polls to the attacks on him on Iowa airwaves. But negative ads show no signs of going away.

"Candidates have moral responsibility to spend millions of dollars running vicious, negative commercials. If a candidate will take Americans off a cliff, the other candidates have an obligation to warn voters. As long as the ads are fair and true, negative commercials are like yelling fire when the crowded theater actually is on fire," said Alex Castellanos, a GOP strategist and CNN contributor who was a top media adviser for President George W. Bush's 2004 re-election campaign and for Romney's 2008 nomination bid but who's not taking sides this cycle.

The biggest overall ad spender: Texas Gov. Rick Perry. His campaign has shelled out nearly $1.8 million to run spots on TV in Iowa. Add to that the nearly $520,000 Make Us Great Again, a independent pro-Perry super PAC, has spent on the Texas governor. But the money spent on Perry may not be paying off, as he remains in either fourth or fifth place in the most recent polls of people likely to attend Tuesday's caucuses.

A close second to Perry in ad spending is former Massachusetts Gov. Mitt Romney, who tops most recent preference polls. The Romney campaign has spent more than $600,000 on ad spending, with the pro-Romney super PAC, Winning Our Future, kicking in just more than $1 million.

In third place, Rep. Ron Paul of Texas, who has been up with ads in Iowa for a month. Overall he's spent nearly $900,000 to put up spots in the state.

Gingrich, who has been under seige from rival campaigns, has spent a modest $312,000 to run commercials on Iowa TV, with the pro-Gingrich Winning Our Future super PAC kicking in $40,000 to air spots
.
Rick Santorum has been surging in the polls but the former senator from Pennsylvania, who until a week ago had barely any money to run ads, just went up with first TV commercial on broadcast TV Sunday. His campaign also went up with a small ad buy on local cable television last week. But the pro-Santorum Red, White, and Blue Fund super PAC has shelled out nearly $200,000 to put up ads in support of the candidate.

Rep. Michele Bachmann of neighboring Minnesota spent nearly $60,000 to run ads in Iowa this summer. She had been off Iowa TV until she went up with her first spot in months on Monday, one day before the caucuses.

The introduction of super PACS, a new factor in presidential politics, has altered media strategy as we know it.

"I think voters care more about whether an ad is fair, factual, and about issues that affect their lives than they do about whether a commercial is made by a campaign or independent PAC supporting a campaign, adds Begala, a former Clinton White House and campaign senior adviser who is now advising an independent pro-Obama super PAC.

New Hampshire, which holds its primary on January 10, one week after Iowa's caucuses, is also so far seeing a decline in ad spending, according to CMAC. All polling indicates that Romney is the overwhelming front-runner in the first-in-the-nation primary.

"New Hampshire was late starting and has stayed slow. Advertising is a 'tell' and the lack of advertising in New Hampshire suggests that Romney - and his opponents agree - that he is the strong front-runner," said Goldstein, adding that "we'll see very quickly if the internal polls tighten up in New Hampshire, and if opponents have funds to go up on the air. If they do, we'll see ad buys. If they don't think it's competitive, we won't see a huge increase in the short window between Iowa and New Hampshire."