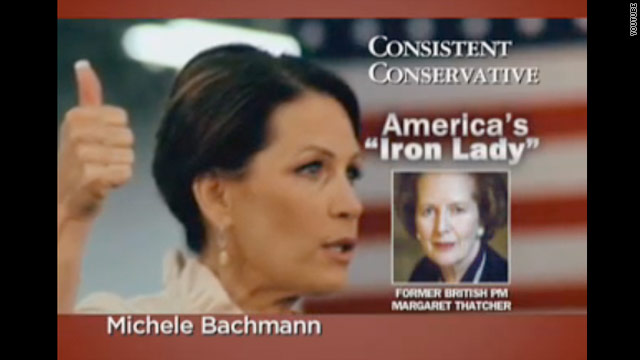 'Iron Lady' goes back up on Iowa TV

The congresswoman's Republican presidential campaign says the ad, titled "Iron Lady," will run on broadcast and cable TV across the state starting Monday.

"Born and raised in Iowa, only one candidate has been a consistent conservative fighter who fought 'Obamacare,' who fought increasing our debt ceiling – even as other Republicans were cutting deals with Obama. An expert in tax law who will fight for deep cuts in spending to reduce America's debt, restore our economy and create real jobs – and she'll never back down," says the narrator in the 30-second spot.

On the campaign trail, Bachmann often compares herself to the famously strong former British Prime Minister Margaret Thatcher, who was nicknamed the "Iron Lady."

The three-term representative from neighboring Minnesota won a much watched straw poll in Iowa in August, but her poll numbers quickly dropped after Texas Gov. Rick Perry entered the race. Bachmann was in the single digits in the three most recent surveys in the Hawkeye State.

She went up with a modest ad buy in Iowa over the summer, but then went dark on Iowa airwaves until about ten days ago.