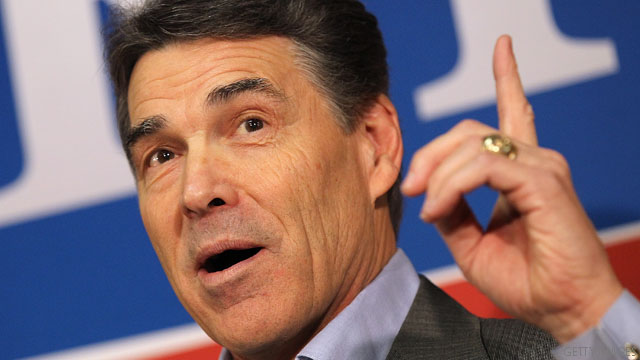 Perry zeroes in on Santorum

The Texas governor, who has seen his poll numbers decline in the first-in-the-nation caucus state, pointed to weak points in Santorum's history including his double-digit loss to recapture his Pennsylvania Senate seat in 2006, poor national organization and past support of Pennsylvania Sen. Arlen Specter, who later switched parties to become a Democrat.

"His … argument is 'I'm the guy that can win,'" Perry said of Santorum Monday on MSNBC. "He got beat by 18 points in his last race. I mean this guy has proven that he can't win races when it matters against a liberal Democrat."

Santorum has said his support of Specter was a mistake and defended his Senate and election records by touting his wins in the swing state of Pennsylvania. He also maintains he will have the ground game needed to compete after the contests in Iowa, where he has focused the bulk of his resources.

But Perry positioned himself as the only alternative to frontrunner Mitt Romney with the ability to capture a national election.

"I'm the only one of the social conservatives and the fiscal conservatives that are running that actually has the ability to raise the money, to have the organization, to run through and finish the primary process," Perry said. "Santorum and [Michele] Bachmann don't."

Monday's attacks followed a back-and-forth between the candidates over their records, which Perry perpetuated during a separate interview Sunday when he accused the senator of having a "problem" with spending and earmarks.

Santorum has become a target of sorts for other candidates following his recent rise in Iowa polling while he continues to vie for the socially conservative vote in the Hawkeye State. Romney compared him to former House Speaker Newt Gingrich, who Romney has characterized as a Washington insider on the trail Sunday.

The most recent poll of the 2012 candidates from the Des Moines Register showed Romney in the top spot with 24% followed by Rep. Ron Paul of Texas with 22%, Santorum with 15%, Gingrich with 12%, Perry with 11% and Rep. Bachmann of Minnesota with 7%. The poll was conducted Tuesday through Friday but results from just Thursday and Friday considered separately showed Santorum in second place with 21% and Paul third with 18% while Romney remained steady at 24%.