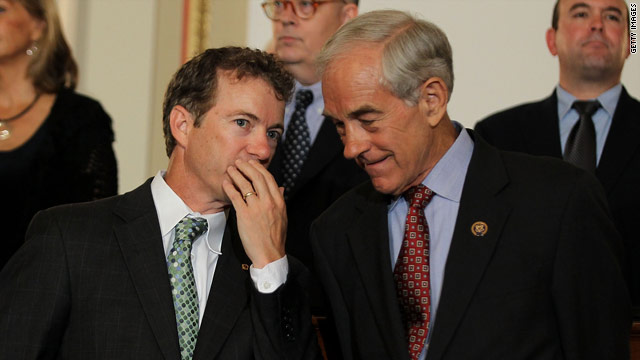 (CNN) – Ron Paul dinged rival Rick Santorum Monday for being a "very liberal" candidate, saying the former Pennsylvania senator and staunch social conservative voted for too much spending during his time in Congress.

He continued: "He spends too much money. He wasn't leading the charge to slash the budgets and vote against big government."

"He voted to double the size of the Department of Education," Rand Paul said. "He voted to expand Medicare and add free drugs for senior citizens and he has voted for foreign aid. Those are not conservative principles. Seventy-seven percent of the American people are opposed to foreign aid and Rick Santorum has voted for it every time it's come down."

Paul also spoke in some of the strongest terms to date about the potential of a third-party bid should he fail to secure the GOP nomination.

"I have no plans in doing that," Paul said. "Tomorrow is a big day. We'll see what happens but I have no intention of doing that, no plans and no desire."