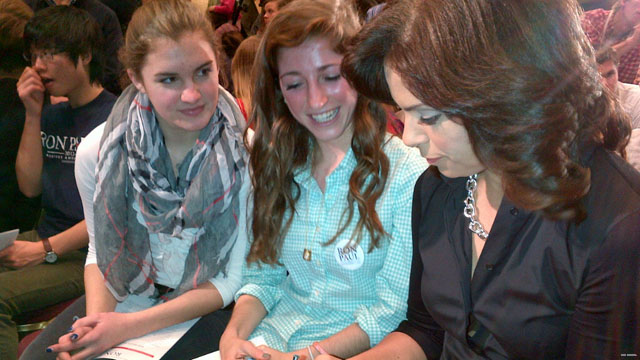 Des Moines, Iowa (CNN) - Nicole Kozlack, 16, attends Blake School in Minneapolis. She bused in to support Ron Paul's White House bid even though her parents are Obama supporters and she is not old enough to participate in Tuesday's caucuses.

She is staying at the Holiday Inn with four chaperones and 20 students who all wanted to be part of the Iowa contest.

"This is the first chance to see who can possibly become the next leader of the country," she said. "I was attracted to Paul by his foreign policy, that we need to get our national security together first, not be the policeman of the world."

The one area where she disagrees with her own candidates - and the others - is gay rights.

"I believe that gay marriage should be legalized. Everyone should have a right to be loved," she said. She would ask them: "Why do you believe that gay couples shouldn't have the chance to be equal to others in society."

She would love to get into politics some day.