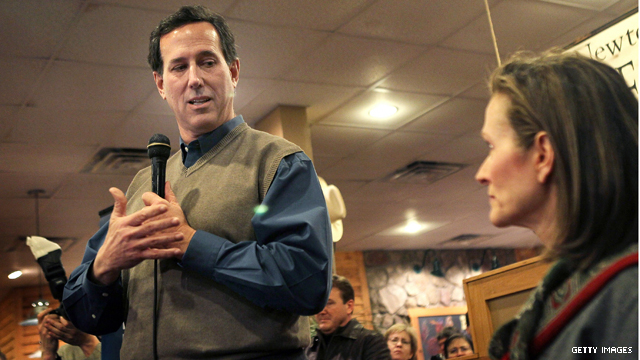 Earlier in the day, Colmes claimed Santorum took the baby home, after living for only two hours, and "played with it for a couple of hours so his other children would know that the child was real."

His apology to the Santorum family followed a barrage of criticism on Twitter for much of the day.

"Just spoke to @ricksantorum. He and Karen graciously accepted my apology for a hurtful comment," Colmes wrote.

But Colmes' comments provoked an emotional response from the Republican presidential candidate and his wife earlier Monday.

Santorum choked up when asked to respond to the comments at a campaign event in Iowa. He described Colmes, who also hosts a show on Fox News Radio, as insensitive and gave a much different picture of the loss.

When asked to respond to the comments, Santorum's wife, Karen, began tearing up and offered to jump in to answer the question. Her daughter walked over to console her.

Santorum went on to tell the story about burying the child the following day, growing emotional as he spoke about the death and talked about Colmes' remarks.

"To some who don't recognize the dignity of all human life, who see it as a blob of tissue that should be discarded and disposed of, this is somehow weird. Recognizing the humanity of your son is somehow weird, somehow odd, and should be subject to ridicule," Santorum said.

After the event Monday, Karen Santorum chided Colmes for making the comments, saying her son's death should be a private issue, not a campaign issue.

"I think it was very inappropriate of him to do that. I'm sad that he did that," she told CNN. "I pray he will never lose a child. He cannot begin to know the pain and the depth of the loss."

Santorum, who's surged in Iowa polls in the last week, is battling to finish in the top tier in Tuesday's caucuses.

The former senator frequently talks about his seven kids on the campaign trail. Gabriel would have been his fourth oldest child.