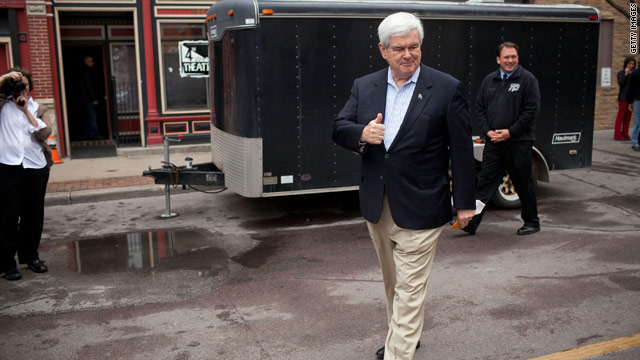 Davenport, Iowa (CNN) – After Newt Gingrich lowered expectations on the eve of the Iowa caucuses Monday, the GOP presidential candidate changed his tune and boasted of pulling off a “great upset.”

The former House speaker was campaigning on the seventh day of his Iowa bus tour in Independence when he told reporters the first nominating contest in the 2012 presidential race was his to lose.

But, Gingrich had a change of heart after another one of his telephone town halls that he’s been holding regularly to give Iowans a chance to talk to the candidate directly to clarify distortions from the negative ads hurled against him.

A precinct captain called in Monday night and told Gingrich, while he was riding on his bus from Cedar Rapids to Davenport, how disappointed he was that Gingrich was essentially counting himself out while he prepared to caucus on the candidate’s behalf.

“I want people to hear you say you’re going to win tonight,” the precinct captain said to the candidate on the phone.

The former Georgia congressman tried to inject the same enthusiasm in his response.

“If we do win, it will be an enormous achievement and I will be very deeply in your debt,” Gingrich said.

Buoyed by his call with the precinct captain and – according to the campaign – 22,000 Republican caucus-goers and independents, Gingrich walked into his event in Davenport driving a more inspiring message than he did earlier Monday.

“So I’m here to tell you, when you have 41% undecided in the Des Moines Register poll, that each of you in the next 24 hours will talk to every one of your friends. And if each of you will go to the caucus and make the best possible argument for nominating an experienced conservative with a national record of achieving things, we may pull off one of the great upsets in the history of the Iowa caucuses. And so I want you to take that attitude into the next 24 hours.”