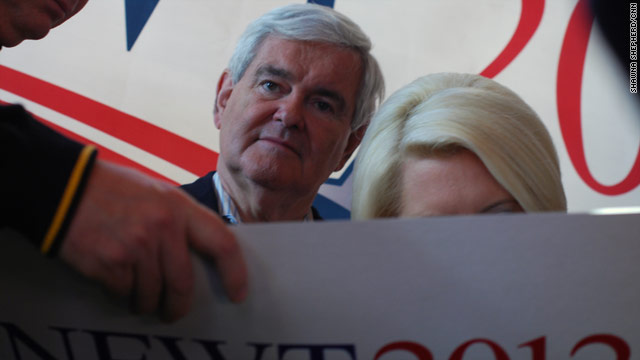 Burlington, Iowa (CNN) - GOP presidential candidate Newt Gingrich may have been subconsciously sharing how he was feeling to folks who gathered at Elly's Tea and Coffee House the morning of the Iowa Caucus.

"I'm sure for some of you it's a relief it's the last day of the caucus," Gingrich said to a room full of about 75 people. "Starting tomorrow morning there will be fewer TV ads, you will have about a third as much mail in your mailbox."

The former House speaker who's been crisscrossing the Hawkeye State for eight straight days now is trying to be positive about his chances as he rallies voters to support him when they go to caucus today.

"But I want start the day by thanking all of Iowa. What I'm really impressed with is how seriously Iowans take their decisions," Gingrich said.

At his second stop, in Burlington, the former speaker asked the audience of about 125 people to vote against the negative ads.

"[S]ay no to every candidate who was running negative ads and if you were to do that you would change the entire culture of campaigning in America," he said.

And he said this election is more than just a referendum on President Barack Obama.

"One of the reasons I talk so much about the negative campaigning is it totally clutters the ability of the American people to have an adult conversation about solutions. I mean, we are in real trouble." Gingrich said. "If this was just a game, if this was like a senior class president, that would be one thing. But this isn't a game. This is the presidency of the most important country in the world at a time when the whole planet is shaking."