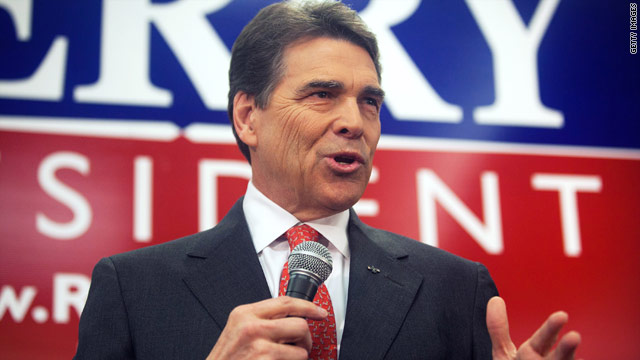 (CNN) - Rick Perry vowed to carry on campaigning if he finishes poorly in Iowa Tuesday, saying on CNN that results from the first-in-the-nation caucus weren't the be-all end-all in the presidential election.

"I'm headed to South Carolina, the plane will be warmed up in the morning and we'll be heading to Aiken, South Carolina to continue on," Perry said on CNN's "John King, USA."

"I mean the idea that one or two states is going to decide who the next nominee for the Republican Party is, is just, you know, that's not reality. This is a 50 state campaign and it's about the future of America," Perry said.

Perry began emphasizing the GOP race as a long haul when Rick Santorum, a staunch social conservative, began to creep up in the polls. Perry, who has also courted the evangelical vote, said Tuesday Santorum would be hard pressed to defend his record on government spending.

"Rick is going to have a real problem when he leaves and people start vetting his background, from a fiscal conservative standpoint," Perry said. "This guy is the king of earmarks and pork barrel spending. He was the liaison between Washington and K Street. And, I mean, he's got some real bags that he's going to have to explain to people and that's going to be a problem for him."

Another front-runner in Iowa, former Massachusetts Gov. Mitt Romney, has a problem sticking to his guns, Perry said.

"Mitt Romney has got a real problem when it comes to consistency," Perry said. "Those folks in South Carolina, I can promise you, they're not going to buy a pig in a poke, so to speak, and a Massachusetts governor that put individual mandates in place that Obama took as the model to create Obamacare is not going to sell in South Carolina."