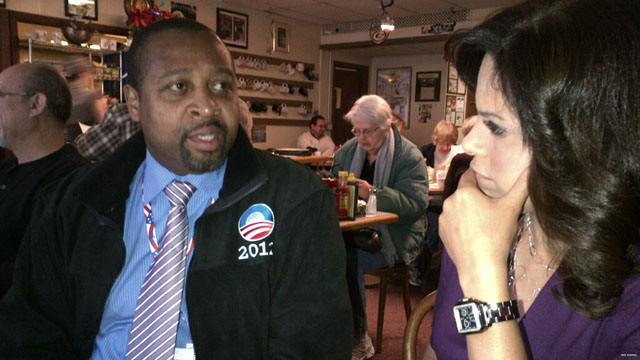 Des Moines, Iowa (CNN) - Michael Smith is an Obama supporter, stumping for his candidate in a state where the Democratic caucus is already decided. He worked on the last campaign and he thinks Democrats need to hear from the campaign to strengthen support.

He is an African American from Chicago, a demographic unfamiliar in the areas where he's campaigning.

"But a lot of the country sees this the same, that the president is waiting with pen in hand to sign important legislation because of Congress," he said. "Our constituency is kind of solid."

He sees Rick Santorum as the biggest threat to his candidate and Michele Bachman is the least.

He will spend Monday evening at precincts telling people to stay strong for the president, that there is an election to be won after these primaries end. He particularly wants to focus on first time voters to see what they care about.

"Reducing the deficit, going back to our platform" should be the issue in this campaign, he said. "Taxing the wealthy."