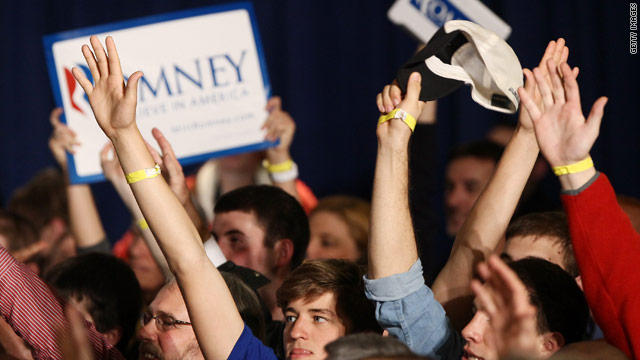 (CNN) - The Iowa caucus results appear to have changed few minds in New Hampshire, at least among likely GOP primary voters who watched the caucus results tonight, according to a new survey.

But a CNN/ORC International Poll also indicates that former Sen. Rick Santorum gained a small amount of support among Iowa caucus-watchers, moving from 5% to 10% among that group.

According to the poll, support for former Massachusetts Gov. Mitt Romney, Rep. Ron Paul of Texas and former Utah Gov. and former ambassador to China Jon Huntsman among likely Republican primary voters in the Granite State who watched the Iowa results were all unchanged.

"Santorum also gained a little ground on issues and personal characteristics, but Romney remains head and shoulders above the rest of the pack on those measures," CNN Polling Director Keating Holland said.

"Two-thirds of Iowa caucus watchers in the Granite State think Romney has the best chance of defeating Obama in November, and that number, as well as his big lead on issues and personal qualities, remains virtually unchanged."

The CNN poll was conducted by ORC International on Tuesday night by telephone, questioning 554 likely Republican primary voters in New Hampshire who watched news coverage of the Iowa caucuses. All interviews on January 3 were conducted between 9:23 pm ET and 10:02 pm ET. The survey's sampling error is plus or minus four percentage points.

This poll does not and cannot reflect the views of all New Hampshire likely voters. It only represents the views of people who could be immediately affected by the Iowa caucus results - those who watched news coverage of the Iowa caucuses tonight or followed it on the Internet.

The New Hampshire voters who watched the Iowa caucus results may be older and more likely to describe themselves as tea party supporters than the larger group of all likely Republican primary voters in New Hampshire.