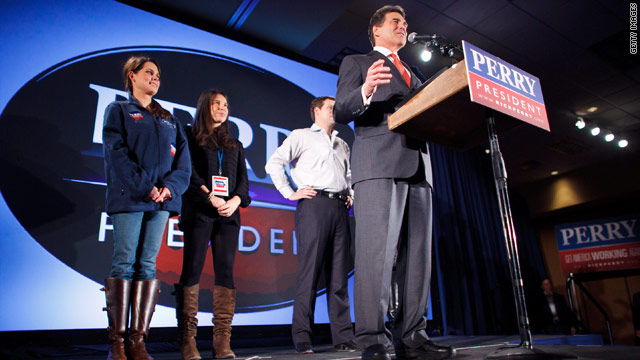 Perry plans to hit the reset button in South Carolina instead, said Katon Dawson, Perry's point-man in the Palmetto State.

"I get that we are the underdog and we are certainly not the establishment candidate, but South Carolina ain't going to let Iowa pick its nominee," Dawson told CNN.

Like any good former state party chairman – he ran the South Carolina GOP for six years - Dawson said the caucus and primary states that vote before his have limited importance.

Before Perry paused to "assess" the state of his campaign after a disappointing fifth place finish in Iowa last night, his staff in South Carolina had put together a busy statewide bus tour for the candidate.

But plans were scrapped yesterday, and Dawson said the campaign here is starting anew.

Dawson said he and other aides are plotting an aggressive campaign push ahead of the Jan. 21 primary that would rely heavily on Perry's strengths as a retail-politician.

And asked if the Perry campaign had enough money left in its coffers to wage an aggressive battle on the television airwaves, Dawson answered: "Sure we do."

"I think we re-set the campaign and do something different here," he said. "Obviously it didn't work in Iowa. But we haven't had our shot in South Carolina."