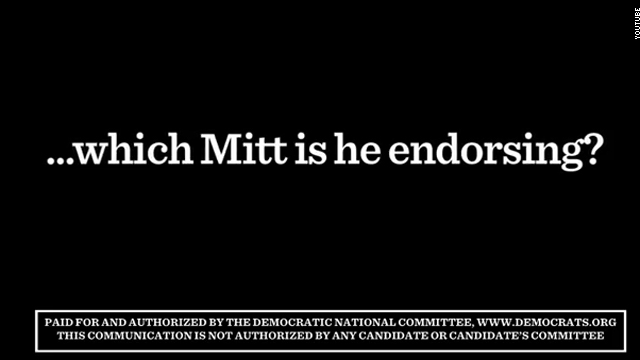 (CNN) - As Arizona Sen. John McCain travels to South Carolina Thursday to show his support for Mitt Romney, national Democrats point to the duo's rivalry from the last presidential cycle.

The Democratic National Committee released a new web video showcasing McCain's 2008 attacks against Romney, many of which toe the same line the DNC now uses to paint Romney as a flip-flopper.

"He's very consistent–totally consistent–because he's had two positions at least on every issue," McCain jokes in one of the clips, referring to Romney as he talks to supporters on the campaign trail four years ago.

"I don't know how to respond to a lot of his charges, because tomorrow he may have a different position," McCain said in a 2008 Fox News interview.

But McCain made headlines Wednesday when he backed Romney in New Hampshire, one day after the former governor took first place in the Iowa caucuses, the nation’s first Republican nominating contest.

The web video ends with: “If McCain thinks Romney has two positions on every issue, which Mitt is he endorsing?”

While Romney and McCain engaged in a bitter feud during the 2008 primary season, the sparring soon ended after Romney dropped out in early February and quickly threw his support behind McCain.

The DNC has frequently – and almost solely – targeted Romney’s record throughout the campaign.

Team Romney has repeatedly hit back, saying the attacks indicate that Democrats expect Romney to become the nominee and use the ads as a way to “distract” Americans from President Barack Obama’s record in the White House.