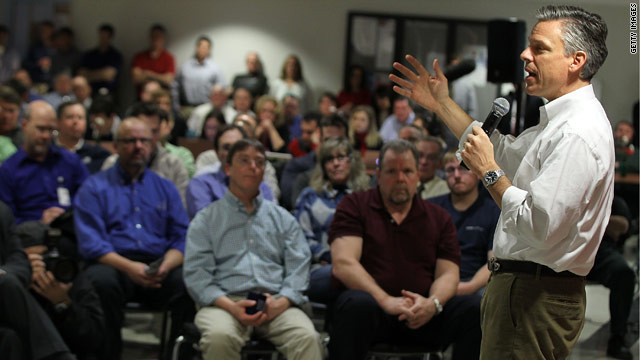 "What is your core? You run for the Senate as a liberal. You run for governor as a moderate. You run for president as a conservative," Huntsman said on CNN's "John King, U.S.A." "People want to know who you were yesterday and what you're going to be tomorrow."

His remarks come five days before New Hampshire's first-in-the-nation primary, a contest Romney is widely expected to win, given his consistently high poll numbers in the state.

According to a Suffolk University/7 News two-day tracking poll released Thursday, Romney has the support of 41% of likely Republican New Hampshire primary voters, with Ron Paul placing a distant second at 18%.

Huntsman, despite coming in with 7% support, is counting on a big showing in the primary, having spent almost all of his time in the state.

Huntsman downplayed Romney's razor-thin Iowa victory on Tuesday, pointing out the frontrunner only garnered a total of 25% of the vote.

"There's a lot of opportunity to run for growth. As we saw in Iowa, the establishment, 75% of those basically said that's not where we're going. We want an alternative," Huntsman said. "I think the same is true in New Hampshire as it is throughout the country."

Asked Thursday where he expects to place in the primary, the former Utah governor said he anticipates exceeding "market expectations" and believes there are several tickets out of New Hampshire.