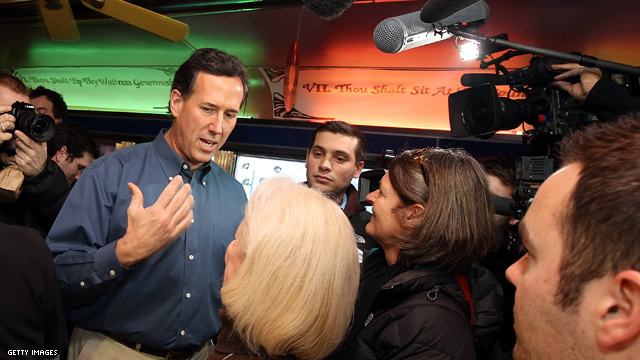 (CNN) – Rick Santorum, who frequently talks about his faith on the campaign trail, received the backing of a major Catholic group on Thursday.

CatholicVote.org, which bills itself as a non-partisan grassroots lobbying organization of "committed Catholics," threw its weight behind the rising Republican presidential hopeful, saying he was the candidate best equipped to win "the political arguments."

"Catholic voters are looking for a candidate who can successfully combine the principles of the dignity of life and the dignity of work. Senator Santorum understands better than any other candidate the profound link between the moral, cultural and economic principles foundational to the success of America," the group's president Brian Burch said in a statement.

With more than 600,000 members on its email list, the group has mostly endorsed Republicans in the past, including Sen. John McCain of Arizona during the Republican presidential primary in 2008.

Santorum, who came in a close second to Mitt Romney by a margin of eight votes in the Iowa caucuses, is known for his social conservatives views, many of which he attributes to his Catholic faith.

In his speeches, Santorum especially speaks out against same sex marriage. He's come under fire for some of his statements arguing that acts -not necessarily feelings– of homosexuality go against his religion.

In an interview Wednesday on CNN's "John King, U.S.A.", Santorum defended his stance.

"I think the Christian teaching on the subject is that one can have desires to do things which we believe are wrong, but when you act out those things, that is a problem," Santorum said. "I was simply reflecting that opinion and that belief structure that I happen to hold as a Catholic."

Asked how he would incorporate his personal beliefs as president, Santorum said he wouldn't favor legislating morality.

As an example, Santorum said he personally disagrees with contraception, a position shared by many in the Catholic faith. However, he said he would vote against any federal rules banning methods of birth control.

"I don't believe that everything that's immoral should be illegal. The government doesn't have a role to play in everything that either people of faith or no faith think are wrong or immoral," he said.

While Santorum performed well in Iowa, a state that votes heavily on social issues, he'll next compete in New Hampshire's first-in-the nation primary, a contest known more for its focus on fiscal issues.