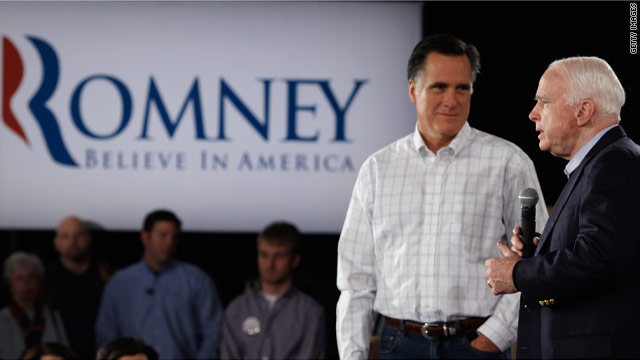 Charleston, South Carolina (CNN) - As he campaigns in South Carolina alongside Republican presidential candidate Mitt Romney this week, Arizona Sen. John McCain is quietly reaching out to his former campaign supporters to gauge their interest in backing Romney.

A South Carolina Republican source familiar with the calls described them as "a soft pitch, more of a courtesy call" to many of the elected officials who supported McCain's 2008 presidential bid.

McCain won the South Carolina primary in 2008, a crucial victory that helped propel him to the Republican nomination.

The McCain team is divided this cycle. Some are supporting Texas Gov. Rick Perry while others are with former Utah Gov. Jon Huntsman.

Harrell is backing Perry while McMaster is supporting Huntsman.

"He is calling a lot of his old friends," McMaster told CNN when asked about the calls. "In any phone call like that, it's always understood that if that something happens to your guy, we'd love to have you on board. But I don't want to characterize the call other than we are friends and he called."

McMaster said he would stand by Huntsman, as he did with McCain in 2007 when the senator's campaign was broke and left for dead.