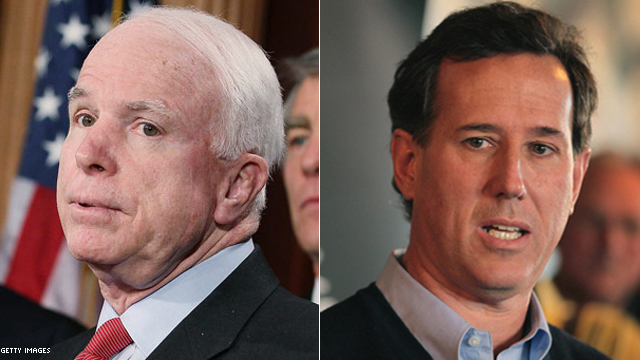 The newly ascendant Santorum, a former Pennsylvania senator, has come under fire from his GOP foes for his unapologetic defense of the earmarking process, which he says is simply a power granted to Congress under the Constitution.

McCain, a fierce and longtime opponent of "pork-barrel spending," joined Romney for a rally in Charleston and set about attacking Santorum's record of securing earmarks.

Romney was silent on the matter, and let McCain do the talking.

"Earmark spending is the gateway to corruption, and that was practiced when Republicans were in the majority," McCain said, flanked by Romney and South Carolina Gov. Nikki Haley, Romney's leading backer in the Palmetto State.

He praised Romney for reducing spending as governor of Massachusetts.

Romney and McCain have not always agreed on the matter of earmarks.

In 2002, McCain told CBS News that millions of dollars being allotted to the Salt Lake City Olympics "a rip-off of the taxpayers" and a "national disgrace."

McCain demanded a federal investigation into money that was being used to build freeways, a light rail system and procure public art.

Romney was the chairman of those Olympic Games and defended the use of federal money.