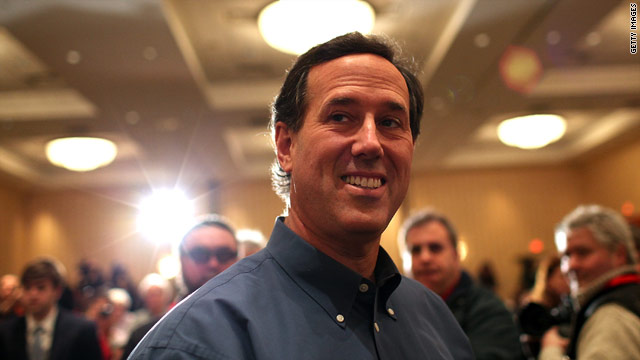 Washington (CNN) – A group supporting Rick Santorum’s presidential bid is gearing up to become more active as the former senator sees his political fortunes on the rise after a surprise second place finish in the Iowa caucuses.

The super PAC Red, White and Blue is planning to go on the air soon “with a significant buy” of ad time in South Carolina, the group’s spokesman, Stuart Roy, told CNN Thursday. He would not detail when exactly the spots would go up and said the organization hoped to soon release details of the amount of the purchase.

"It was a terrific day yesterday, and that has continued today,” Roy said.

He added that Wednesday was the single largest day of fundraising for the group and said the pace on Thursday “has been very similar to yesterday’s pace.” The group has seen previous donors give more donations, and some who earlier refused to give are now reversing themselves.

Because it had limited funds, Red, White and Blue spent $289,000 on commercials in Iowa, according to CNN’s ad consultant Kantar Media’s CMAG.

Conservative activist Foster Friess, a major Wyoming investment executive, confirmed to CNN he is one of the major supporters behind Red, White and Blue and vowed to CNN to help increase the group’s ability to put out a message supporting Santorum.

“I have been a fan since I met Rick Santorum in 1996,” Friess told CNN by telephone Thursday. He went to Iowa this week and campaigned alongside Santorum in a pickup truck along with a small group of others and spoke at one of the precinct caucuses on the former Senator’s behalf Tuesday night.

He refused to say how much he so far has donated to the group. “I don’t want my wife to find out,” he joked.

Friess, who donated to Romney in 2008, is so jazzed by Santorum’s rise he returned CNN’s request for comment shortly after leaving knee surgery and was planning to call at least 10 major donors later Thursday to push them to donate to the super PAC.

“I just got rolled out of surgery,” he told CNN and joked he was going to start calling right then.

“I am so committed,” he added, saying he believes Santorum will be the strongest challenger to President Barack Obama. “I am going to encourage any person I know.”

The super PACs have played a large role in this year’s Republican presidential primary campaign. While they can’t legally coordinate their efforts with the campaigns they support, these committees have often done the dirty work of attacking the other contenders, allowing the candidates’ operations to stay more positive.

The $1.2 million spent in Iowa by the group supporting Romney, Restore Our Future, is credited with helping to raise questions about Newt Gingrich’s record and deflate his popularity in the state.

While it won’t run ads in New Hampshire, Red, White and Blue is planning to conduct phone banking on Santorum’s behalf.

The group is also looking ahead and plans on running an ad campaign in Florida, which holds its primary on Jan. 31–10 days after South Carolina. Restore Our Future is already airing commercials in the state.