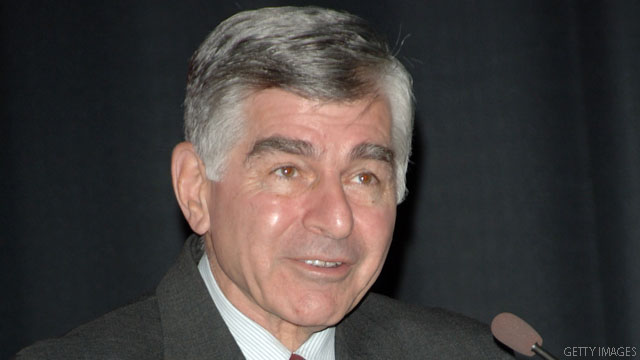 (CNN) - As he plots his strategy to win the Republican presidential nomination, Mitt Romney might pick up a few helpful tips from an unlikely source: fellow former Massachusetts governor Michael Dukakis, the 1988 Democratic nominee.

Dukakis recounts his triumphs and travails as a White House hopeful 24 years ago in an essay for a new book, "The Making of the Presidential Candidates 2012" (published by Rowman & Littlefield), and though he doesn't mention Romney by name, he details the pros and cons of campaigning in New Hampshire as a native of neighboring Massachusetts.

"[C]ampaigning in Manchester or Nashua wasn't that much different from making a speech in Worcester or New Bedford," he said. "I had an obvious advantage in New Hampshire. People in New Hampshire often read Boston newspapers and watch a lot of Boston television."

He added that having near-favorite son status in the first-in-the-nation primary state also has its drawbacks.

"Of course, the downside of the picture was that if a candidate from Massachusetts couldn't carry New Hampshire - and by a decisive margin - he was probably dead nationally," he said. "So even though people up there knew me and a lot of them seemed to like me, it was a state that clearly could not be taken for granted."

Romney, who lost the 2008 New Hampshire primary to the eventual GOP nominee, John McCain, enjoys significant leads in recent polls in the Granite State but has drawn criticism from his opponents for campaigning in South Carolina on Thursday and Friday.

"Iowa was an entirely different story. I had only been there a few times. It was, and is, a lot different from New England," Dukakis wrote of his third place finish in the caucuses that year behind Iowa neighbors Richard Gephardt of Missouri and Paul Simon of Illinois. "There were a lot of long faces in my hotel room the night of the caucuses as we began getting the results."

Romney eked out a narrow victory in Iowa Tuesday and is favored to win New Hampshire next week, but Dukakis said there is more to the race than the first two contests.

"Doing pretty well in Iowa and winning in New Hampshire hardly guarantees victory," he said. "Winning a presidential nomination contest is a long slog – a marathon, I often called it – and one is going to have his ups and his downs."

As for the general election campaign, Dukakis said he much preferred the environment and mechanics of running in the primaries and said life after the convention could get fairly stale.

"What's it like to go from a moving series of primary contests to the final head-to-head round? Tough, more difficult than I imagined, and, believe it or not, increasingly boring," he wrote. "There may be ways to spice up a campaign, and I could have done a better job of trying to come up with them, but by the time you win the nomination, you've said just about all you can possibly say about the great issues of the day. Trying to make your platform – and yourself – sound fresh and interesting for the five or six months after you have clinched the nomination and before you reach the finish line is not easy. The routine is pretty much the same."

Dukakis also addresses a lesser-known aspect of running for president: the abundance of eager-to-please campaign staff.

"I remember in the late stages of the campaign I expressed a strong desire one day to have a coffee milk shake when I arrived at my hotel in the late evening. For the next two weeks I found about a dozen coffee milk shakes waiting for me every time I wrapped up the day," he wrote. "I finally told somebody that the fact that I wanted a milk shake didn't require a daily dozen of them, that this was costing us a lot of money, and that milk shakes that went untouched weren't much good for anything the following day."

On his eventual defeat to Republican George H.W. Bush, the former Massachusetts governor says he mishandled his responses to various attacks from the then-vice president's campaign but says he has no one to blame but himself.

"I - nobody else - made the decision that I was not going to respond to the Bush attack campaign, and that turned out to be a terrible mistake."