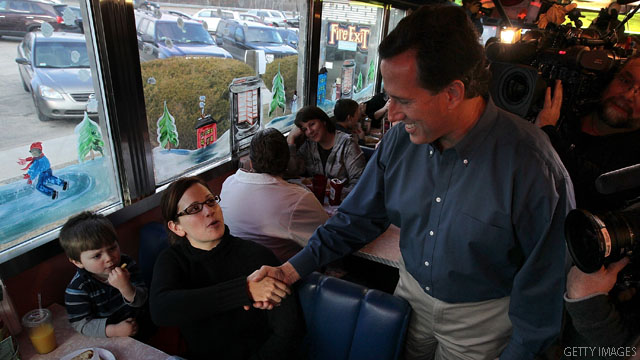 According to a Suffolk University/7 News two-day tracking poll, the former governor of neighboring Massachusetts has the support of 40% of likely Republican New Hampshire primary voters. Rep. Ron Paul of Texas is a distant second, at 18%, and Santorum, the former senator from Pennsylvania, is at 11%.

The survey, released Friday morning, was conducted Wednesday and Thursday. It is the first poll taken entirely after Tuesday night's Iowa caucuses, where Romney edged out Santorum by 8 votes to win the contest.

The poll shows former House Speaker Newt Gingrich at 9%, former Utah Gov. and former ambassador to China Jon Huntsman at 8% and Texas Gov. Rick Perry at 1%. According to the survey, a rather large 15% are undecided.

Romney has been the frontrunner in New Hampshire polling for over two years. He is well known in the Granite State thanks to his years as Massachusetts governor (most of the more populated southern part of the state is in the Boston media market). Romney also owns a vacation home in New Hampshire, and besides spending lots of time in the state campaigning for the White House over the last year and in the last presidential cycle, he has also made many stops in the state stumping for fellow Republican candidates.