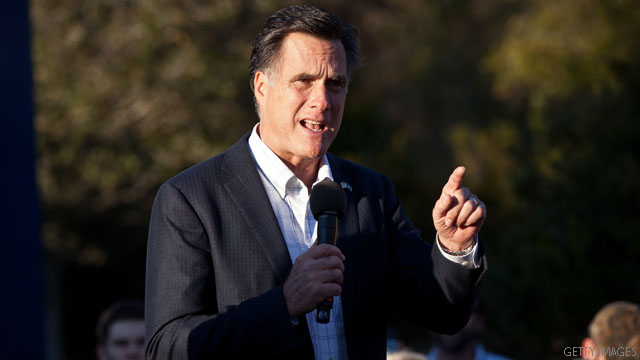 Conway, South Carolina (CNN) - Friday's announcement that the unemployment rate had dropped to 8.5% did little to deter Mitt Romney from savaging President Barack Obama's handling of the economy.

"This president doesn't understand how the economy works," Romney announced at a campaign rally in South Carolina, just after the new numbers were released. "It's time to get a president who does."

The economy added 200,000 jobs in the month, the Labor Department reported Friday, doubling the number of jobs added in November.

Romney made no mention of the new jobs numbers, but said Obama has failed to live up to the promises he made during the early days of his administration.

"He has failed to put American back to work," Romney said. "Remember it was early in his administration, he said, 'Look if you let me borrow $787 billion, why I will be able to keep unemployment from going above 8%. Well, it went past 8%, and it hasn't been back since, three years later."

Romney, taking a break from the New Hampshire primary race, was appearing at the second of two rallies in South Carolina with Gov. Nikki Haley and Sen. John McCain, both of whom endorsed Romney.

The trio also campaigned in Charleston on Thursday.

As he eyes a win in the Jan. 21 primary, Romney is focusing much of his efforts on the South Carolina coast, where social issues like abortion and same-sex marriage are less important to Republicans than fiscal and military ones.

McCain, who won the South Carolina primary in 2008 on his way to the GOP nomination, predicted that Romney will win New Hampshire and then lock up the nomination here.

"He's going to win in New Hampshire and it's going to come down, my friends, as it always does, to South Carolina," McCain said. "If Mitt Romney wins here, he will be the next President of the United States."