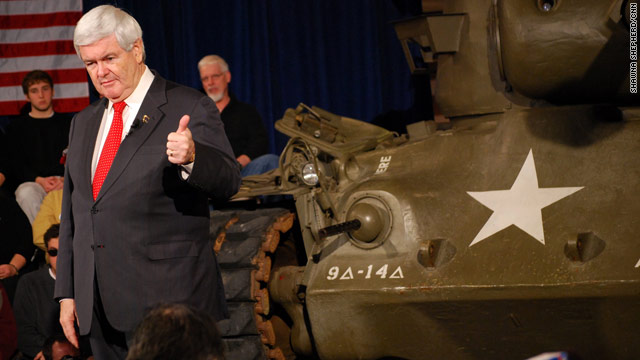 Gingrich in friendly attack-mode ahead of debate

Wolfeboro, New Hampshire (CNN) – With a World War II-era military tank behind him and two critical debates ahead of him, Newt Gingrich gave his most muscular performance in weeks at a town hall Saturday.

Speaking at a WWII museum in Wolfeboro, the historian and Republican presidential candidate made reference to another former governor of Massachusetts who ran for president.

"From a political standpoint I look at this tank lovingly because I remember Michael Dukakis," said Gingrich of the Democratic presidential nominee who lost to President George H.W. Bush in 1988. "And it's just a reminder that governors of Massachusetts don't always make good presidential candidates."

The well-choreographed event set up the perfect punch line for Gingrich, who is struggling in the polls and trying to draw stark contrast between his record and that of frontrunner Mitt Romney.

The presidential candidates face off in a debate Saturday night for the first time since last week's Iowa caucuses that dealt Romney a first place win. Former Pennsylvania Sen. Rick Santorum came in a close second followed by Rep. Ron Paul of Texas in third and Gingrich in fourth.

The former House speaker dismissed questions from reporters about whether he will "attack" Romney at Saturday's debate, or whether he planned to go after Santorum in an effort to define himself as the Romney alternative.

"It's not a me versus, I'm the Reagan conservative alternative," Gingrich said.

Gingrich was seemingly in his element speaking to a friendly audience of veterans and military families at the Wright Museum of WWII History. He told reporters after the event that he does not plan to go for the jugular during Saturday's debate.

"I'm not going to go after Mitt Romney. I may define the reality of a Reagan conservative and a Massachusetts moderate. I may describe the difference between cutting taxes and raising taxes, or being right-to-life and putting Planned Parenthood into 'Romneycare.' That's the most I have to do," Gingrich said. "If your case is good you can be relaxed and happy."

Despite Gingrich's proclamations that he will draw contrasts with his opponents yet remain positive, he's not pulling punches through ads and most recently launched a website discrediting Romney.