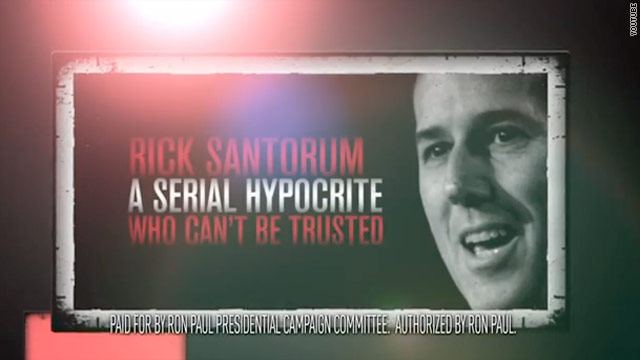 In the commercial, set to begin airing Monday on statewide cable TV, Paul hits the former Pennsylvania senator as a "corporate lobbyist and Washington politician" with a "record of betrayal."

The spot takes a similar tone as a scathing ad the Paul campaign released against former House Speaker Newt Gingrich during the candidate's November surge, calling Gingrich a "serial hypocrite."

"Now, another has emerged," said the new ad, as images of Santorum appeared on the screen.

The commercial attacks the former senator on a number of issues, including his vote to raise the debt ceiling five times. Paul also spotlighted Santorum's vote for the infamous "Bridge to Nowhere" in Alaska, a federal earmark over which Perry also railed Santorum in a recent radio ad.

While a new CNN/Time/ORC Poll released Friday showed former Massachusetts Gov. Mitt Romney far ahead of the GOP pack in South Carolina with 37% of support, Santorum took second place with 19%.

Following behind were Gingrich at 18% and Paul at 12%.

"This ad showcases the real Rick Santorum and it's the reason why Santorum should be leery of competing in the 'First in the South' Republican primary, and it is why we hope for a strong, competitive showing in the Palmetto State," added Mr. Benton.

Earlier in the week, Paul made headlines when he described Santorum as "very liberal" in an interview with CNN just hours before the former senator bested Paul in the Iowa caucuses by four percentage points.

Defending himself, Santorum argued the government's biggest spending problem isn't earmarks but entitlement programs, adding that his earmark record was simply an effort to funnel taxpayer money back to his constituents.

"When you go to Congress, you make sure that when taxes go from your state to Washington, D.C., you fight to make sure you get your fair share back," Santorum told CNN's "John King, USA" earlier this week.