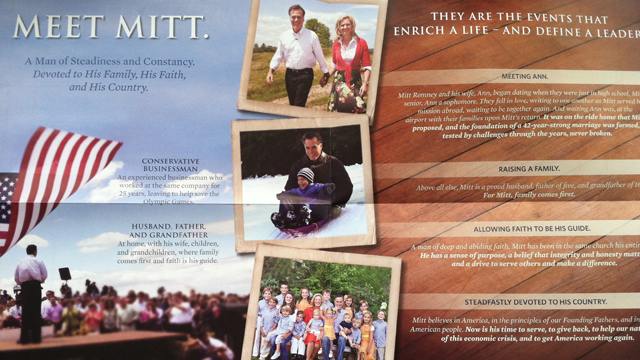 Greenville, South Carolina (CNN) – Despite lingering suspicions about his Mormon religion among some evangelicals here, Mitt Romney is embracing his faith in a new mail piece that began hitting South Carolina households on Saturday.

The glossy fold-out brochure, provided to CNN from a voter who received it, seeks to turn Romney's deeply-held religious convictions and his 42-year marriage into assets in a state where roughly six in ten Republicans call themselves "born again" or evangelical Christians.

The flip side features a quote from the former Massachusetts governor: "If I'm President of the United States, I will be true to my family, my faith, and our country, and I will never apologize for the United States of America."

The mailing makes no specific mention of Mormonism but repeatedly invokes Romney's "faith" and explains how it would guide him in the White House.

"A man of deep and abiding faith, Mitt has been in the same church his entire life," the mailer reads. "He has a sense of purpose, a belief that integrity and honesty matter, and a drive to serve others and make a difference."

The mailer signals that Romney is willing to confront questions about Mormonism head on in South Carolina, where his frontrunning campaign is now competing aggressively in hopes of delivering a knockout blow against his conservative rivals.

Another section of the colorful mailer features a portrait of Mitt and Ann Romney under a banner that describes him as "a husband, father, and grandfather."

The literature explains that Romney is "pro-life, "pro-marriage" and "pro-family."

It's the second Romney mail piece to land in South Carolina mailboxes this week.

A separate mail piece obtained by CNN on Thursday focused on Romney's business credentials and his plans to slash government spending.