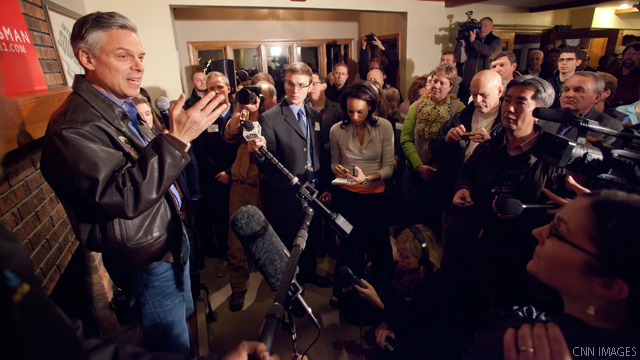 The Republican presidential candidate was peppered with questions about budget cuts, taxes, immigration and foreign policy. Many in the crowd said they were still undecided ahead of Tuesday's GOP primary. Several times, Huntsman's answers were greeted with enthusiastic applause.

The house party was held the same day two polls showed a slight increase in the former Utah governor's numbers. One survey, from Suffolk University of people likely to vote in the primary, put Huntsman at 11%, while he got 17% in an American Research Group poll. Both were conducted before this weekend's debates.

"I think it really is the natural phenomenon of the voters of the Granite State coalescing around their favorite candidates," Huntsman told reporters before entering the home. "I think it happens, you know, 24 to 48 hours out. I don't think it's unusual. I think it's a fairly normal thing to play out at this point and I believe that will continue."

Huntsman said he sees a huge opportunity. "There's a lot of blue sky in this race," he said.

While he remains optimistic, and said he is confident he will beat expectations, Huntsman doesn't want to set the bar too high.

"The fact remains that I am still an underdog," he said. "And we still have a long way to go."