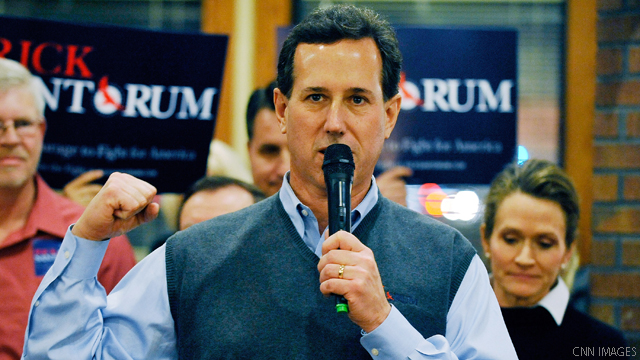 Greenville, South Carolina (CNN) - If there were any doubts about how important South Carolina is to Rick Santorum’s Republican nomination hopes, he erased them on Sunday.

Speaking in ominous terms, Santorum urged a crowd at Stax's Original Restaurant in Greenville to make their voices heard in the January 21 primary and vote for the one true “Reagan conservative” in the race.

“You have an opportunity in this election to speak very loudly,” he said. “You are going to see this race coming into South Carolina with a lot on the line.”

Santorum called the 2012 election “the most critical election maybe since 1860” - the election that presaged the Civil War - and said the stakes could not be higher in November.

In an implicit shot at GOP frontrunner Mitt Romney, Santorum said South Carolina must vote for a candidate who offers a “bold stark contrast” to President Barack Obama.

Anything less would be a serious failure, he said.

“If South Carolina does not step up and give us that clear contrast so we will have another 1980 election, where we have a real difference and as a result a mandate when we win, to make the changes that are necessary to bring America back from the brink, then South Carolina will have let America down,” he said. “You have let down your children and your grandchildren.”

Santorum did not mention any of his GOP rivals, but in a message clearly aimed at supporters of Newt Gingrich and Rick Perry, he said conservatives should begin to “coalesce around the candidate who has the track record to carry the message with conviction.”

Santorum would not answer when asked after the speech if he needs to win South Carolina outright.

“We need to do well here, buddy,” he told a reporter.

He left soon after and jumped into a pickup truck for a ride to the airport, where a flight back to New Hampshire awaited.

Santorum picked up the endorsement of Gary Bauer, a former presidential candidate and prominent conservative activist, at Sunday’s meet and greet, the second of two events during Santorum’s brief South Carolina foray.

Santorum aides claimed that 500 people showed up at his previous event at a Greenville sports bar.

Bauer predicted that conservatives would begin to line up behind Santorum after the New Hampshire primary. He predicted that at least one candidate would drop out after the state votes on Tuesday.

“I believe that a winnowing process is taking place inevitably, and I suspect after New Hampshire, we will see one candidate out, and by the time of Florida it will be down to maybe three,” he told CNN. “And I think that Sen. Santorum has the staying power to be the candidate conservatives will end up rallying around.”