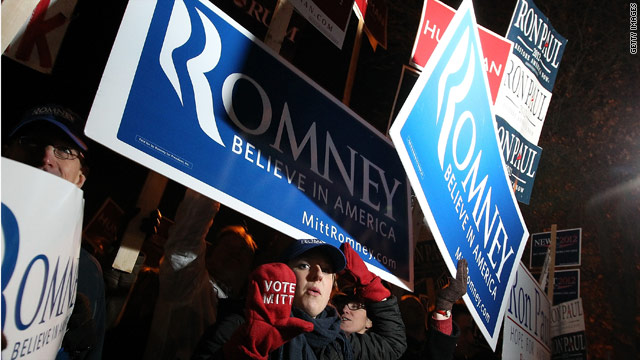 Iowa City, Iowa (CNN) - As polls and pundits try to handicap the Republican nomination race, the smart money may be on a little-known commodity market which has proven to be a leading indicator of trends in campaigns.

"Traders have incentive not to tell us what they want to happen... but what they think will happen," said Joyce Berg, who directs the Iowa Electronic Markets, or IEM, at the University of Iowa.

To listen to our podcast on the campaign, including what market trends sound like for different candidates, click here. Or keep reading for more.

The Iowa Electronic Markets are run as an academic exercise by the University of Iowa's Tippie College of Business, but they are actual markets where investors use real money, up to $500, to bet on who they think will perform in elections.

You can call them futures contracts on politicians or a way to bet on campaigns. Either way, the IEM have been notably accurate.

"On average, our markets the night before an election are within 1.2 percent of the outcome," Berg told CNN Radio. "But they are more accurate relatively, the farther you get from the election."

In other words, the University of Iowa says its political commodity market is even better than polls at predicting outcomes farther from elections. This after 24 years of existence and research.

The Iowa Caucuses were a prime example. The first poll quantifying the so-called Santorum surge came out from CNN/Opinion Research on December 28. But the Iowa Electronic Markets showed the rise of Santorum six days earlier, as prices started leaping for contracts betting on him to do well in the Iowa Caucuses.

University of Iowa's Berg says at first she wasn't sure that a commodity market could predict politics as well as it could business. But the results quickly made her reconsider.

"I mean, if you think about it, it seems logical that markets would work this way," Berg concluded, "They do things that you think an accurate tracking device should do… when there's news the price changes. When there's something being talked about but it's not new, the markets don't change."

The IEM are not perfect. On the morning of the Iowa Caucuses, traders believed Ron Paul would place second and Rick Santorum third.

But, again, the overall trends seems to be significantly accurate and in real time. Traders are reacting to news immediately, whereas polls take days to survey and report change in opinion.

So then what does the market say about the Republican fight?

In the IEM, Romney has been in front in the GOP nomination market for months and has seen another lift in contract prices since the Iowa caucuses. Looking at prices as odds, the market now is giving Romney an 83 percent chance of giving the final speech in Tampa.

– CNN's Dan Szematowicz and Emma Lacey-Bordeaux contributed to this report.