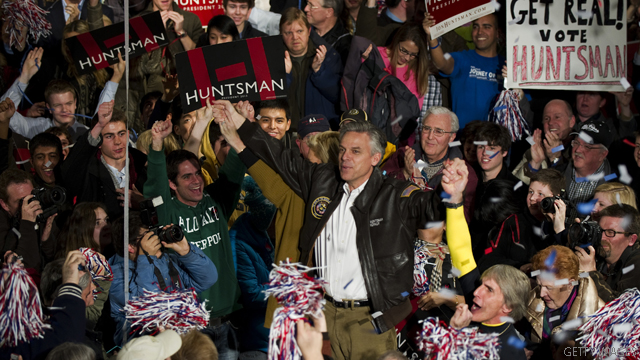 Exeter, New Hampshire (CNN) - Jon Huntsman returned to the site of his June presidential announcement to make his final appeal to Granite State voters ahead of Tuesday’s first-in-the-nation primary.

The former Republican governor, who has staked his White House ambitions on a strong showing in the state, told a packed town hall in Exeter Monday that he has become a "shameless salesman" on behalf of his candidacy as he crisscrosses the state asking for votes.

After 170 public events in the state, Huntsman said his effort in New Hampshire was no longer being ignored.

"Can you feel a little bit of momentum in the air?" Huntsman asked the crowd. "We're going to surprise a whole lot of people in this country tomorrow night."

Huntsman's campaign themes of putting trust and country first were peppered throughout his remarks and on the tips of voters' tongues as they exited the 157-year-old town hall.

Democrats, independents and Republicans at the event cited their faith in the candidate as a reason for their support.

Gil Allen, a self-described Democrat, said he plans to register to vote Tuesday in order to cast a protest vote for Huntsman because "He has character."

Republican Robert Moore, an economics professor at the University of New Hampshire, made his final decision Monday night and said he will vote for Huntsman Tuesday.

"I trust he can bring our country together," Moore said. "The Republican Party needs someone to unite the country."

"I trust him," Rose Almon-Gagne, who made up her mind a few days ago, said after the event, "He's a really honest person."

And Huntsman's prediction for tomorrow?

"That ‘trust’ word is going to take us all the way through the finish line tomorrow," Huntsman said before red, white and blue confetti shot into the room.