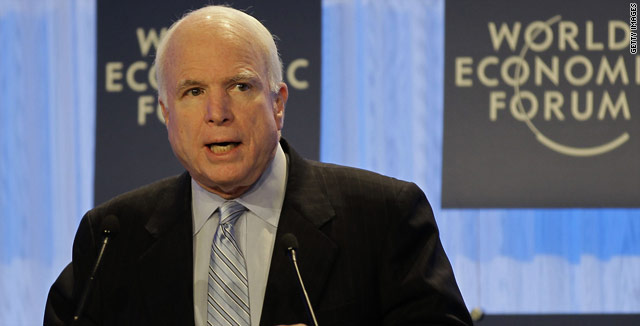 (CNN) – Republican Sen. John McCain on Monday blasted the Supreme Court's 2010 ruling that eventually paved the way for the rise of super PACs, blaming it for the election cycle's increasing ad wars.

"Now it's the system under which we operate, which leads to this kind of campaigning and will lead to corruption and scandals. I guarantee it." McCain said on CNN's "The Situation Room with Wolf Blitzer."

In the 2010 "Citizens United" case, the Supreme Court made it legal for groups to raise and spend unlimited amounts of money for a candidate, as long as the group does not coordinate with the candidate or contributed directly to his or her campaign.

Calling it the "worst decision in the last 50 years," McCain said the Supreme Court "basically unleashed–without transparency and without accountability–huge amounts of money from these so-called 'independent campaigns'."

The group that backs Gingrich, "Winning our Future," is expected to run aggressive ads against Romney's record, ahead of South Carolina's first-in-the-South primary on Jan. 21.

The move comes after the pro-Romney group, "Restore our Future," pursued a similar tactic against Gingrich in Iowa before the state's caucuses last week.

But McCain, who recently threw his support behind Romney, said he's not worried about the upcoming ad campaign against the former Massachusetts governor.

The 2008 Republican presidential nominee also warned against Gingrich's new campaign strategy, which aims to draw sharp contrasts between his record and that of Romney.

"But, look, I lost my general election campaign, so I'm a little bit reluctant to tell people how they should campaign," McCain said.