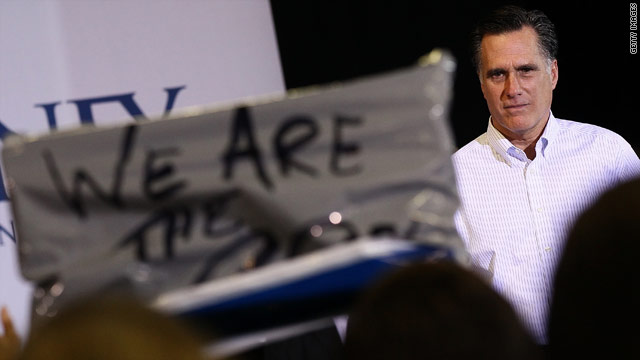 (CNN) - Mitt Romney sparred with a group of Occupy protesters at a rally in New Hampshire Monday, a rare sight for the former Massachusetts governor who normally avoids engaging when his campaign stops are interrupted.

When a group began chanting “Live Free or die! Always occupy!” during a campaign stop in Bedford, Romney intervened and asked the group what message they were aiming to get across.

“How about, instead of shouting, why don’t you say what you mean? What’s your view? Madam, what do you think?” Romney asked.

When a protester responded with a grievance about the role of money in political campaigns, Romney used the moment to take a swipe at President Barack Obama.

“Who’s the president who’s spending more money to campaign than any in the history of America?” Romney asked to cheers from his supporters. “The answer is that this president is spending money and has spent money. You know what this president has been the first president to throw aside the public funding program and break all those barriers and to spend massively more than any president in history.”

Romney said the protesters weren’t offering a legitimate alternative to the American system of government.

“I get the chance to see these guys who come out here to protest and now and then I ask them, 'Tell me, what would you replace America with, what kind of system would you have?' They don’t know. And the truth is, there has never been any place on Earth that has freed people from poverty like free enterprise American style,” Romney said.

Romney’s demeanor during the skirmish was markedly different than his reactions to previous interruptions to his campaign events, and reflected a style employed by his surrogate, New Jersey Gov. Chris Christie, on Sunday.

Responding to chants from a group of attendees yelling "Mitt kills jobs, Christie kills jobs,” the Republican governor fired back.

"Really? You know something may go down tonight, but it ain't gonna be jobs sweetheart," Christie said, before pointing to his record of job creation in the New Jersey.

At other events, Romney has tersely told protesters, “you had your turn, now it’s my turn,” before waiting for police to escort protesters out.