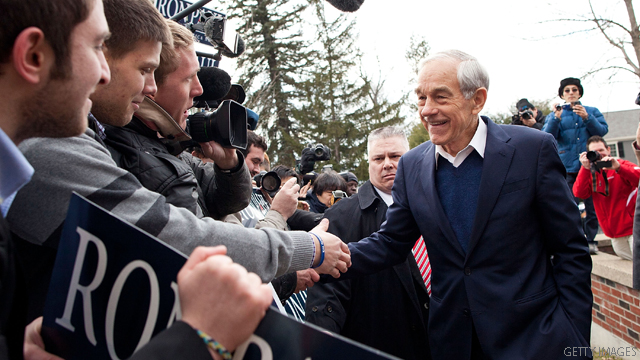 Texas Rep. Paul said the Republicans who are taking aim at the former Massachusetts governor over the comment are "unfairly attacking" the candidate.

"I think this is just typical politics and they're unfairly attacking him on that issue," Paul said outside a polling place at Webster School in Manchester. "He never literally said what they say he said. They're taking him way out of context."

In a speech to the Nashua Chamber of Commerce Monday, Romney said he wanted Americans to be able to switch insurance companies if they were unhappy with their service.

"I like being able to fire people who provide services to me," he said. "You know, if someone doesn't give me the good service I need, I want to say 'You know, I'm going to go get someone else to provide that service to me.'"

Paul also said Romney's history as CEO at Bain Capital, over which he has received criticism, is an example of the free market.

"You save companies, you save jobs when you reorganize companies that are going to go bankrupt," Paul said. "They don't understand."

While Romney touts his job creating past, he has increasingly come under attack for his private sector experience, with critics suggesting thousands lost jobs while he was at the helm of the venture capital company.

"His comment yesterday about liking firing people, as soon as I saw the whole quote I said it's not fair to take it out of context, he clearly was talking about the right to choose between service providers," Gingrich told reporters in Bedford, New Hampshire. "He wasn't talking about actually firing people per se."