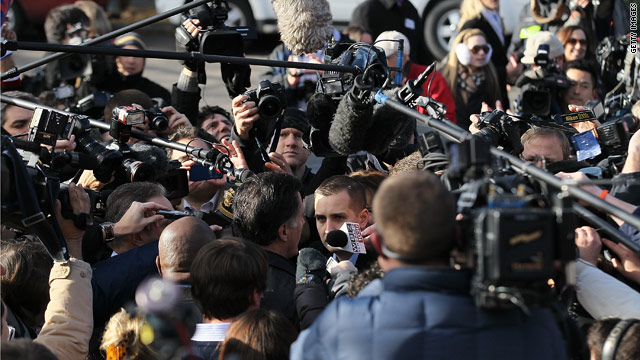 Manchester, NH (CNN) – The media mosh-pit around Newt Gingrich should have been the first clue. The working press was in for a day of pollingpalooza.

As Mr. and Mrs. Gingrich stepped foot off of their bus outside the Webster School polling place in Manchester, an unruly mob of photographers, reporters, high school students, and thrill-seekers swooped in for the shot.

The Gingrichs did not disappoint.

By all appearances, they never actually met any voters at this stop - which was sort of the point. Instead they and the media swarm buzzing around them made a circle in the grass on the school grounds.

As I explained to the former speaker he was live on CNN, he sounded like a kid caught on camera at a football game.

The young adults could have bodysurfed across the campaign chaos as he then came up with a new riff on rival Mitt Romney.

"Romney raised taxes. I fought to lower taxes. He was for gun control. I'm for the second amendment. I think you'll find a real contrast," Gingrich said.

The former speaker and his wife, with not one hair out of place, then made a bee-line for the Newt 2012 bus.

On board the Newtmobile, Gingrich compared the scene to one of the world's greatest parties.

"It was like Mardi Gras... Without the alcohol, the fun, the excitement. It was certainly as crowded as Mardi Gras," Gingrich said.

After Gingrich's bus pulled away, a polling captain emerged from the school to warn journalists against a repeat performance. To make her point, Manchester police brought in two officers on horseback.

But the party would only get bigger.

Mitt Romney and his entourage arrived next. Unfortunately for the front-runner so did a throng of pro-Obama demonstrators who were eager to remind Romney of his now viral "I like to be able to fire people" comment.

As Romney held the child of one supporter, one of the protesters shouted: "Are you going to fire the baby?"

Later in the morning, Jon Huntsman stopped by in search of some pollingpalooza magic.

Huntsman was blunt when asked whether New Hampshire was "do or die."

"We have to do well. Make no mistake about it," Huntsman told CNN.

Still, Huntsman was hopeful his hard work in the state would "upend" conventional wisdom.

"We have worked harder than anybody else, 170 events. We have given it our heart and soul. We've done everything humanly possible," he added.

Last but not least at the Webster School polling place was Ron Paul. The libertarian Republican chastised his GOP rivals for seizing on Romney's "fire people" comments.

"I mean it seems a little weird me coming to the defense of Romney," Paul said.