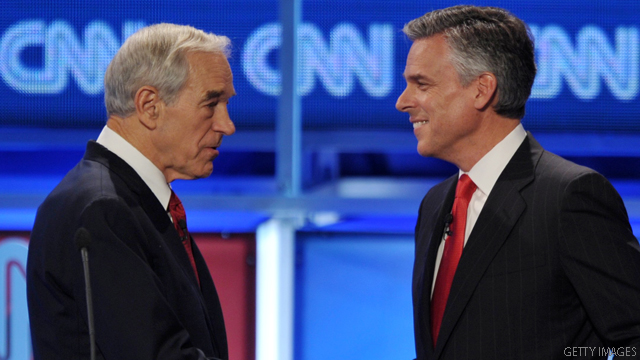 The final two polls here in the Granite State leading up to Tuesday's first-in-the-nation primary both indicate Mitt Romney holding a 19 point lead over the rest of the field of candidates in the race for the Republican presidential nomination.

And according to poll surveys, Rep. Ron Paul of Texas and former Utah governor and former U.S. ambassador to China Jon Huntsman are battling for second place, with former Sen. Rick Santorum of Pennsylvania and former House Speaker Newt Gingrich in a dead heat for fourth place, and Texas Gov. Rick Perry in a distant sixth place.

According to the final Suffolk University/7 News tracking poll, released early Tuesday morning, Romney had the support of 37% of likely GOP primary voters in New Hampshire. Romney is very well known here in New Hampshire. He was governor of neighboring Massachusetts for four years last decade, and was often on Boston TV, which much of the heavily populated southern New Hampshire receives. Romney also owns a vacation home in the Granite State and has spent lots of time over the past six years in the state campaigning for himself or for fellow Republicans.

The tracking poll indicates Paul, who's making his third bid for the White House, is at 18% and Huntsman, who skipped campaigning in Iowa (which held the first contest in the primary caucus calendar) to spend all of his time stumping in New Hampshire, is at 16%. Paul's two point margin is well within the poll's sampling error.

Perry, who left the Granite State following the back to back debates this weekend, is now campaigning in South Carolina, which holds its primary on January 21. He's at one percent in the tracking poll. Seven percent were undecided.

An American Research Group poll released Monday night also indicates Romney grabs the support of 37% of likely GOP primary voters, with Huntsman at 18%, Paul at 17%, Santorum at 11%, Gingrich at 10% and Perry at one percent, with four percent undecided.
Both polls were conducted Sunday and Monday.