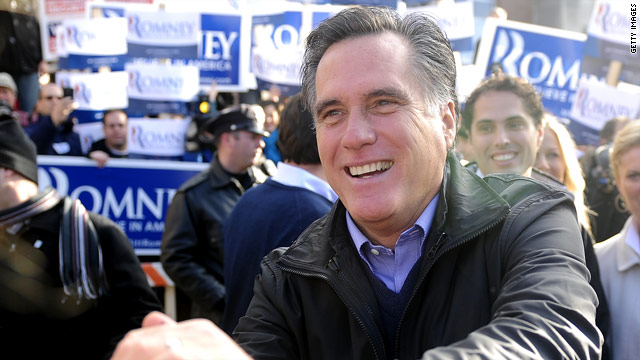 (CNN) - American Crossroads, an independent Republican group, swatted back Democratic attacks against Mitt Romney Tuesday that claim the Republican presidential frontrunner is unable to excite more than a quarter of the GOP.

"The truth? The 25% level of support we're seeing with Romney is a floor, not a ceiling," Jonathan Collegio, the group's communications director, wrote in a memo.

Democratic groups, as well as President Barack Obama's re-election team, have recently taken aim at Romney's results from the Iowa caucuses, in which he essentially tied with Rick Santorum with 25% of support, edging out the former Pennsylvania senator by a margin of only eight votes.

"I mean, it's clear there are a majority of Republicans who are resistant to (Romney). He only got a quarter of the vote in Iowa," Obama campaign senior strategist David Axelrod said Sunday on ABC's "This Week."

But Crossroads, a group founded by Karl Rove and who's political director, Carl Forti, also works as a senior strategist for the pro-Romney super PAC "Restore Our Future," characterized the Democratic attacks as misleading.

"With Mitt Romney, as opposed to virtually every other candidate in the GOP field this cycle, the difference is that his negatives (all candidates have them) are already widely known and built into his level of support," Collegio said.

Collegio pointed to other Republican candidates who surged to the top of the field but failed to maintain their frontrunner status when faced with an onslaught of attacks from their opponents.

For Romney, who's making his second run for president, Collegio argued there is nowhere to go but up.

"There is very little out there about Romney that Republican voters don't already know that could significantly affect his support," he wrote.

Crossroads said its defense of the former Massachusetts governor is not an endorsement and maintains it will stay neutral during the Republican presidential primary.

"However, American Crossroads is 100% opposed to all goofy spin against GOP candidates coming from Obama, his surrogates and the DNC," Collegio added.

Romney advocates may soon tout a number higher than 25%, as Romney is expected to win New Hampshire's first-in-the-nation primary by a wide margin on Tuesday. Recent polls showed Romney hovering at or around 37% in the Granite State.

"For Rove, helping the favored candidate of Wall Street is an important sign of trust for the billionaire executives that Rove relies on for contributions. For Romney, earning Rove's embrace is the successful culmination of six-years of saying anything to win the support of the Washington Republican establishment," Bill Burton, the group's senior strategist, said in the memo.

- CNN's Jessica Yellin and Peter Hamby contributed to this report.