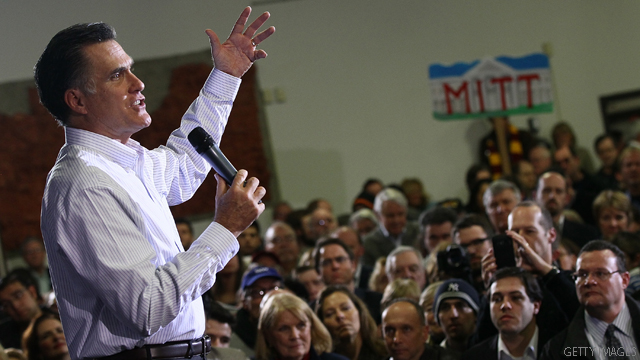 Ahead of South Carolina, Romney hits back against rivals

"Speaker Gingrich is going to try and throw everything he can at me," Romney said on CNN's "Starting Point with Soledad O'Brien." "He tried here in New Hampshire. It didn't work."

The ad comes 10 days before the candidates compete in South Carolina's first-in-the-South primary, a contest known for focusing on social issues.

Romney repeated a line he's often used on the campaign trail, admitting that he had switched his stance on abortion over the years but added his actions weren't unique.

"Like Ronald Reagan before me, many years ago I changed from being pro-choice to pro-life. I'm pleased with having been a pro-life governor," Romney said. "Conservatives and evangelicals got behind me in record numbers."

The Republican presidential frontrunner also hit back against recent charges from another GOP rival, Texas Gov. Rick Perry, who on Tuesday compared Romney's former private equity firm to a group of "vulture capitalists."

Perry's comments followed rounds of attacks from Democrats, including President Obama's re-election team, who hit hard against Romney's corporate history, saying his company, Bain Capital, was responsible for laying off thousands as it bought and sold companies.

But Romney said he's unconcerned the criticism will taint his presidential bid.

"It's been brought up every time I've run," Romney said, adding that Democrats are trying to put "free enterprise on trial."

"But, you know, Rick Perry and Newt Gingrich are going to be the witnesses for the prosecution. I'm not worried about that. They can take it as they like," he said. "You saw last night that approach didn't work very well for (them). And so we'll take it to the next level."