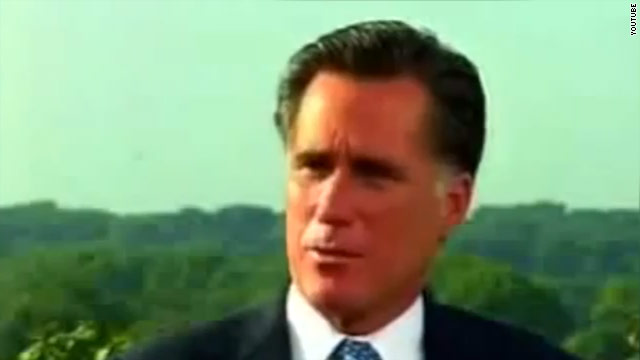 Spartanburg, South Carolina (CNN) – One day after declaring he would not delve into personal attacks, Newt Gingrich kicked the Mitt Romney family dog into the campaign's discourse Wednesday.

Gingrich called out the dog story in a web video posted on his campaign's website that brings up a story about the former Massachusetts governor driving with their family dog, Seamus, riding in a container on the roof of the car.

Tuesday Gingrich has said he intended to focus entirely on the records of the two candidates.

"Well we're doing everything we can to draw a sharp and clear contrast with Gov. Romney on the record. We're not getting into personal stuff," Gingrich told reporters Tuesday in Bedford, New Hampshire.

The ad, "For the Dogs," is a montage of statements from the former Massachusetts governor, including a clip from Fox News when Chris Wallace asks Romney, "I have a yellow lab named Winston. I would no sooner put him in a kennel on the roof of my car than I would one of my children. Question, what were you thinking?"

Romney responds: "This is a completely air-tight kennel mounted on the top of our car. He climbed up there regularly, enjoyed himself. He was in a kennel at home a great deal of time as well. We loved the dog. It was where he was comfortable and we had five kids inside the car and my guess is he liked it a lot better in his kennel than he would have liked it inside."

The Gingrich camp, obviously trying to tug at the heartstrings of animal lovers, cues this exchange and a number of other humorous statements or gaffes to playful-sounding music that concludes with a question on screen: "Imagine what [President Barack] Obama would do with a candidate like that. Only Newt Gingrich can win debates against Obama. Mitt Romney can't."

The web video was posted the day Gingrich began campaigning in South Carolina, the southern primary state with a reputation for mud-slinging politics.

The former speaker often chides his opponents and the media for taking sentences out of context but Gingrich does just that with the first sound bite in the minute-and-a-half web video.

"I like being able to fire people who provide services to me," was Romney's quote from Monday that was widely mocked by his rivals, including Gingrich, who later came to his defense after he found out what Romney was referring to when he made that statement.