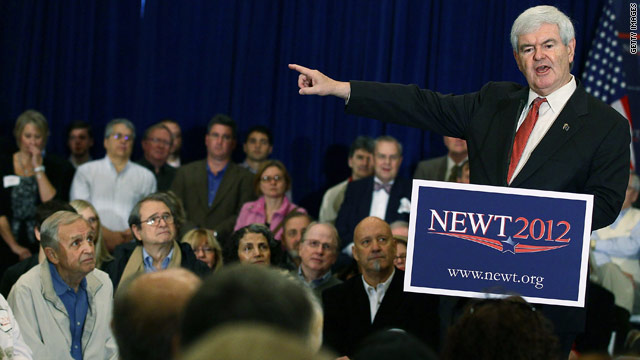 After finishing a disappointing fourth in the first two nominating contests in Iowa and New Hampshire, Gingrich questioned Mitt Romney's credentials and whether the frontrunner can beat President Barack Obama.

"You're not going to beat a billion dollar machine with dishonesty, with somebody who is inarticulate or confused or doesn't quite know where they stand," Gingrich said.

He said the state's January 21 primary will likely determine the Republican Party's nominee.

"I believe that South Carolinians are either going to center in and pick one conservative, or by default, we're going to send a moderate on to the nomination," he said.

The former House speaker disputed charges that he is against capitalism by questioning Romney's career at Bain.

"Criticizing specific actions ... is not being anti-free enterprise. And crony capitalism where people pay each other off at the expense of the people of this country is not free enterprise and raising questions about that is not wrong."

Gingrich opened up his remarks at the Laurel Creek Country Club by inviting children up to the stage. He launched into being "fed up" with the tone of American politics.

"You have a bipartisan establishment that has been running this country, that has created a gigantic mess. You have bureaucracies that are out of control, judges who think they can be dictators. You have systems around this country. You have laws that don't work. So, we have got to change not just Obama, we have got to change the entire direction of the United States of America to get it back on track and that is our obligation to these young people."

He said he will continue to speak the truth even if it draws Republican foes.

"If you speak out every effort is made to distort, confuse what you're saying because what you're saying may be so frightening to the establishment," said Gingrich. "And I'll let you decide whether this is where you want America to go and whether you're willing to help in the next 10 days to get there."