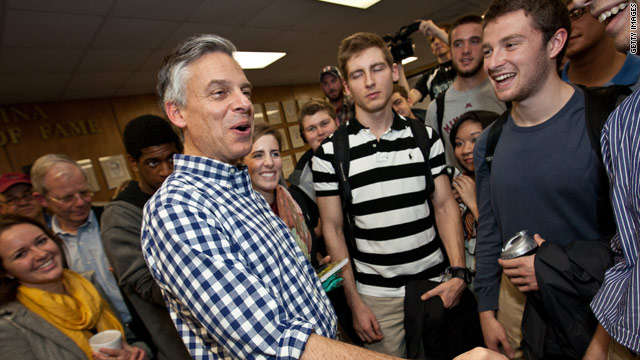 Former Utah Gov. Jon Huntsman and former Pennsylvania Sen. Rick Santorum both avoided jumping onto the pile of critics who say Mitt Romney destroyed jobs and bankrupted businesses during his time as CEO of Bain Capital, though it wasn't easy for them to throw praise at the Republican frontrunner.

"I hate to sit here and be a defender of Mitt Romney, but to me this is federal capitalism, and I have to say that this is an attack probably not warranted," Santorum said.

Speaking on CNN's "The Situation Room with Wolf Blitzer," Santorum said the line of argument against Romney didn't mesh with facts from Bain's history.

"Bain Capital, at least from the record I looked at, had a lot of success," Santorum said. "I mean they weren't a company that has a long track of record basically destroying the companies and selling off the pieces. They had some situations where they had failures but every company does."

Speaking in Columbia, South Carolina, Huntsman said the business model of Bain was an historic element of capitalism.

"If you have creative destruction in capitalism, which has always been a part of capitalism, it becomes a little disingenuous to take on Bain Capital," Huntsman said. "I think it was more instructive to take on Romney's record as governor."

That record, Huntsman said, would be more than enough to tear down Romney.

"He was elected to represent his people for four years, and what did he do for the economy? He didn't deliver any big economic proposals. I delivered the largest tax cut in the history of my state, the flat tax," Huntsman said.

Rick Perry hasn't been so merciful on Romney for his record at Bain, labeling the firm "vulture capitalists" for their role in taking over companies that went on to lay off workers.

A super PAC backing former House Speaker Newt Gingrich recently purchased the rights to a scathing half-hour documentary portraying Romney as a heartless corporate raider. The group said it would use the video to produce television ads to run in South Carolina.