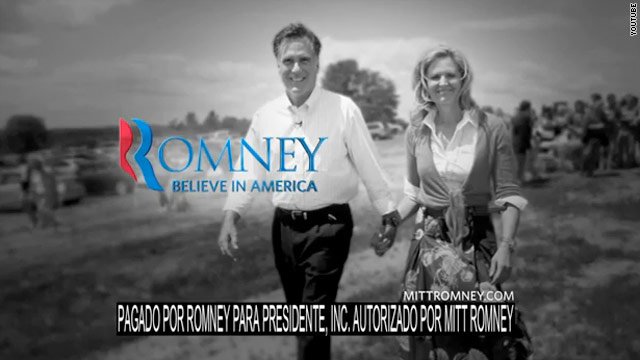 Romney goes up with Spanish ad in Florida

(CNN) - In an appeal to Latino voters in Florida's upcoming primary, Mitt Romney's campaign put out a new Spanish language ad Wednesday touting his credentials as a businessman.

"The United States represents liberty, opportunity, where anything is possible," Craig Romney said in the ad. "My father, Mitt Romney believes in those American values because he has lived them and will fight to restore the greatness of our nation."

The ad shows footage of Romney meeting with people at various manufacturing plants and campaign stops.

Romney himself used Spanish at the end of the spot, delivering the typical political ad campaign message: "I'm Mitt Romney, and I approve this message."

Florida, which holds its primary on January 31, will be an important state in the general election.

A new polls shows Romney statistically tied with President Obama in the Sunshine State with the Republican presidential frontrunner taking in 46% to Obama's 43%, a margin within the sampling error.