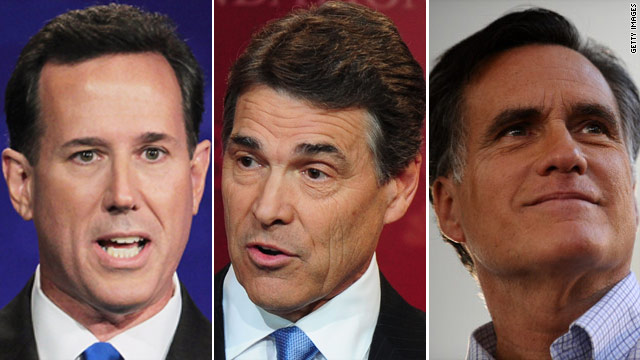 Santorum takes on Perry and Romney

"Rick Perry requested 1,200 earmarks as governor of Texas, and Rick Perry's been in politics in Texas for 25 years, so he's been in public life more than anyone else running for president," Santorum told a group of reporters on his way out of Yesteryears Restaurant.

"It's sort of hard for someone who's been in public life and elected office for 25 years to be the outsider, when he also requested earmarks – over a thousand earmarks – from Washington D.C," Santorum continued.

During his remarks, Santorum also seemed to take aim at Mitt Romney –albeit not by name– when he asked the nearly 100 people in attendance to vote for the candidate who believed in them.

"What good is it if we elect a republican who's going to be, well, a little better than the guy we have in there right now. That's a pyrrhic victory. That's not a victory at all," Santorum said, emphasizing how important he believes this election to be. "We want a leader that believes in us and is not an establishment candidate, who's going to do more of the same."

He downplayed Romney's one-two punch wins this month in Iowa, where he topped Santorum by eight votes, and New Hampshire, where Romney owns a house and was heavily favored.

"Half the people that voted yesterday weren't even Republicans," Santorum said. "The idea that he's wrapped up the Republican nomination because he won by eight votes in Iowa and he won his home state is just silly."

By going after Perry –his biggest rival for South Carolina's social conservative vote– and Romney –the presumptive frontrunner– Santorum is trying to recapture some of the momentum from his close second-place finish in socially conservative Iowa last week. To that end, Santorum vowed that he would campaign in the Palmetto State just as he did in the Hawkeye State.

Santorum famously visited all of Iowa's 99 counties that state's caucuses, and hitting South Carolina's 46 counties before the state's primary on January 21 might be slightly less taxing. Wednesday marked the former senator's second visit to Fairfield County, where he recently won the Fairfield Republican Party's straw poll with over 50 percent of the vote.

Addressing one important local issue, Santorum condemned the actions of the National Labor Relations Board's in intervening with Boeing's plans to build a factory in South Carolina. But he also launched into President Obama's recent decision to go through with a recess appointment for several members of the NLRB.

"This president seems like he feels he's above the law," Santorum said, accusing the president of "violating the constitution" with his recess appointments. "I hope the United Sates Senate tries to teach him a lesson that the constitution means what it says and that he's not going to get away with appointing people he doesn't have the right to appoint. And I would suggest just shut United States Senate down until the president of the United States complies with the law."