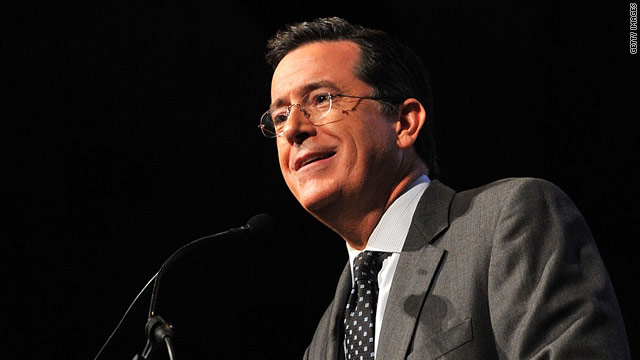 "I'm proud to announce I plan to form an exploratory committee to lay the groundwork for my candidacy in the United States of South Carolina," Colbert said at a taping of his show Thursday evening.

"Clearly my fellow South Caroliniacs see me as the only Mitternative," Colbert said.

However, according to South Carolina election law, Colbert may not get his way. The state's website said write-in votes are prohibited in political party primaries or for president and vice president.

South Carolina Election Commission spokesman Chris Whitmire told CNN with the Republican presidential primary just nine days away, there "won't even be a way for someone to do that because it's not allowed under the law."

The comedian missed the November 1 filing deadline to get his name on the GOP primary ballot. Whitmire added that, in accordance with the law, there's no write-in space on the electronic and paper primary ballots.

Colbert, who filed to run for the White House as a Democrat in 2007, lost a fight with South Carolina's Democratic Party when it removed him from the state's 2008 primary ballot, a step that ended his presidential bid.

But the comedian has been back in full force this election cycle with his own Super PAC, called "Making a Better Tomorrow, Tomorrow."

In October, the Federal Election Commission allowed Colbert to form the group, which can raise and spend unlimited amounts of money on a candidate as long as it doesn't coordinate with a candidate's campaign.

In the taping of his show Thursday, Colbert confronted that hurdle, officially signing over the super PAC to fellow Comedy Central host Jon Stewart.

As a satire on super PAC rules, the group created a commercial endorsing "Rick P(a)rry" just days before the Texas governor launched his White House bid this summer.

In the fall, Colbert also made news when he offered $500,000 of super PAC funds to cover the cost of South Carolina's primary on January 21, following a heated battle within the state over who would pay for the contest-the state party or the taxpayers.

In return, Colbert, a South Carolina native, asked for the rights to change the name of the primary to the "The Colbert Super PAC South Carolina Republican Primary."

The state did not take him up on the offer.