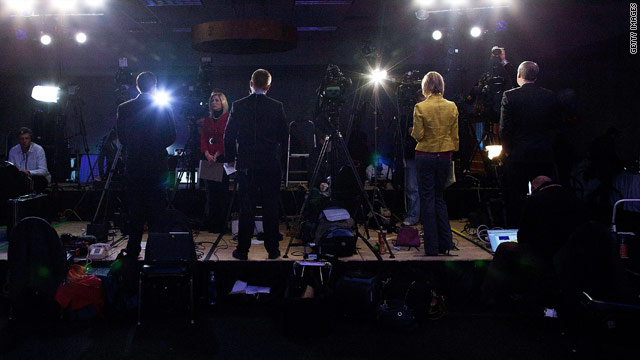 Washington (CNN) – Jun Takao fully understands the Iowa caucuses, the New Hampshire primary and the complicated fight for convention delegates. But the veteran Japanese journalist and Washington bureau chief does not comprehend one thing about American presidential elections.

"What's interesting for the audience (about) listening to the debate dozens of times?" he asked. "Sometimes it's total repetition."

Listen to Takao's other thoughts and the latest from the campaign trail in our podcast here. Or keep reading for more.

Takao runs the Washington bureau for NHK, the translated initials for the Japan Broadcasting Corporation. The public broadcaster is one of the country's most prominent television networks and has made a stunning commitment to the 2012 American campaign – with 30 crews covering the race.

"Japan considers (itself) the biggest friend of America," he explained, "So every four years, we pay a lot of (attention)."

Interest is high. But, Takao adds, so is confusion.

"This process is pretty long and it's pretty difficult for Japanese to understand," the spectacled man said with a frustrated smile. "We spend a year to educate the Japanese audience on what's going on."

Japan's government is a parliamentary system where party leaders chose the prime minister and there is no national vote. In recent years a string of prime ministers have served for relatively brief terms, with the Japanese public often getting to know a new leader only after they are named as the head of government.

"So this process of debating with each other or discussing in diners, this process is totally unique for us," Takao pointed out.

But the length of the campaign and the repetition of stump speeches in the U.S. baffles many in his audience. "Sometimes it's difficult," he said, "Why do Americans pay so much attention to this process? One candidate says… (the same thing) again and again."

The bewilderment goes from campaign bus tours to the number and lengths of debates. So far, Republicans have held 15 candidate debates, which ties the previous record from 2008. And five more network debates are scheduled in the weeks ahead.

"It's my profession, so I try following the two-hour debate each time," Takao noted, "but I don't know how it could be interesting for the regular audience in the United States. It's one of the mysterious parts (of the campaign) for me."

Another challenge? Takao says some campaigns will not credential foreign media, not even a powerhouse like NHK. This was a problem at Mitt Romney headquarters in both Iowa and New Hampshire.

"We wanted to cover the victory announcement… live," he said," but they didn't let us in." Takao described long efforts to try and obtain credentials that ultimately failed.

In the end, the NHK correspondent had to wait until after the speeches ended and Romney had left. When the doors opened and people were leaving, the NHK team ran in and shot a quick stand-up.

"Hopefully someday they'll notice about NHK and pay attention to the Japanese audience," he said.

– CNN's Dan Szematowicz and Emma Lacey-Bordeaux contributed to this report.