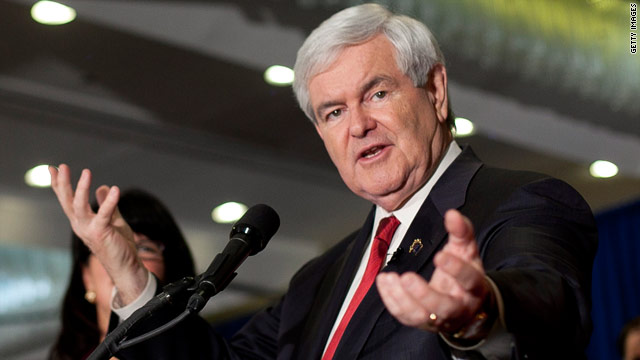 Miami, Florida (CNN) - Perhaps it was the strong Cuban coffee.

At a campaign stop at the legendary Cafe Versailles in Miami's little Havana neighborhood, Newt Gingrich served up his toughest critique to date on Mitt Romney's claims on creating jobs.

The ad states Romney and Bain created "thousands of jobs," not 100,000 jobs as the former Governor has previously claimed.

When asked about the ad, Gingrich laughed.

The former House Speaker called on Romney to produce records from his tenure at Bain to prove his claims.

"He's still not prepared to release any documents from Bain to prove anything," Gingrich said.

That jobs claim does not appear in the new Romney ad.

"Mitt Romney helped create and ran a company that invested in struggling businesses, grew new ones and rebuilt old ones, creating thousands of jobs," the spot states.

In an interview with CNN, Gingrich questioned Romney's claims.

"I'm saying that he misstated the facts," Gingrich said.

A new ARG poll finds Romney and Gingrich in a statistical dead heat for the upcoming South Carolina primary.

Gingrich, who has come under sharp criticism from conservative pundits for his attacks on Romney's Bain record, appeared to be pivoting away from the topic at events in South Carolina on Thursday.

But in his remarks to a packed crowd of Cuban Americans inside the Café Versailles, the former speaker defended his comments, saying the issue is fair game. The Florida primary comes just ten days after South Carolina.

"If he can't stand up today and defend his claim today, how is he going to stand up to Obama in the fall," Gingrich asked.

Gingrich admits he has now abandoned his previous pledge to wage a positive campaign for the GOP nomination. But only, he says, because Romney attacked him first.

"You either unilaterally disarm and quit or you decide you're going to match," Gingrich told CNN.

Gingrich, who has previously said he would not tolerate any misstatements from the super PAC, gave no indication he has a problem with the "King of Bain" spots.

Gingrich brushed off the possibility the comparison could damage the GOP, in the event Romney becomes the party's nominee.

"The Obama people will figure out their own line of attack," Gingrich said.

"Let him explain his record. It's certainly not a conservative record," the former speaker added.

UPDATE: In a paper statement on Friday afternoon, Newt Gingrich called on Winning Our Future, a super PAC supporting his presidential bid, to edit or take down advertisements and a 30-minute documentary-style film critical of Mitt Romney and Bain Capital if they contained factual errors but he listed no specific problems. He then called on Romney to do the same.

"I am calling for the Winning Our Future Super-PAC supporting me to either edit its "King of Bain" advertisement and movie to remove its inaccuracies, or to pull it off the air and off the internet entirely," he said.

He said accuracy in advertising is a "two way street," and repeated his criticism of ads produced by the Romney campaign and their allies.

"Furthermore, I am once again calling on Governor Romney to issue a similar call for the Super-PAC supporting him to edit or remove its ads which have been shown to contain gross inaccuracies, something the Governor has thus far refused to do," he said in the statement.