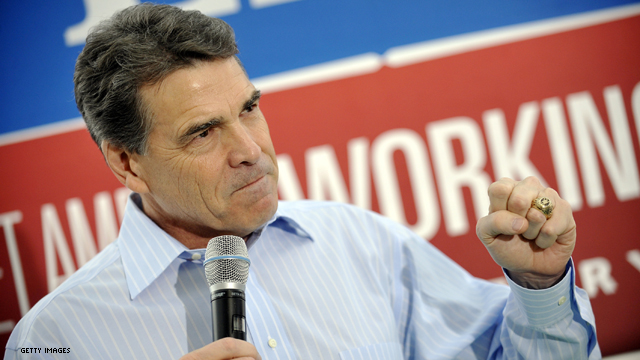 Perry at Squat and Gobble

Bluffton, South Carolina (CNN) – One day after President Obama officially notified Congress that the national debt was nearing its limit, Rick Perry told an overflow crowd here that the Congress should say no to any increase in the debt ceiling.

"We got a President of the United States that is mortgaging the future of our children with all these spending programs – $15 trillion worth of debt – and wants more now, wants to raise the debt ceiling, and the answer to that is no, right Mick," Perry said, referencing Congressman Mick Mulvaney, who had introduced him during a visit to the Squat and Gobble restaurant. "No. No to the debt ceiling. Quit the spending."

Most Washington observers see an incremental increase in the nation's borrowing limit as a mere formality following a compromise passed last year, and in order to prevent an increase, members of Congress would likely have to muster up enough votes to override a presidential veto.

But in Bluffton, Perry stuck more to generalities, continuing to claim the outsider mantle while calling for government to get out of small business' way. Citing what he called over-burdensome regulations, Perry also responded to President Obama's request today for the authority to merge federal departments.

"The president's talking about consolidating some agencies of government, good for him," Perry said. "He's not doing enough. We talked this morning about taking the Department of Interior, you know either eliminating or merging it into another agency like the Department of Agriculture. Those make sense. Why do we have a Department of Education in Washington D.C.?"

After a few days of deriding rival Mitt Romney's private equity experience, Perry didn't mention any of his opponents by name Friday, but he did stress the importance of the South Carolina primary.

In closing, Perry compared his campaign here to the Alamo, telling the crowd of 100 or so squeezed into the small dining room, "that although the Alamo got no reinforcements, help is on the way for Washington D.C., and we're going to be part of that that rides in to keep this country on track."